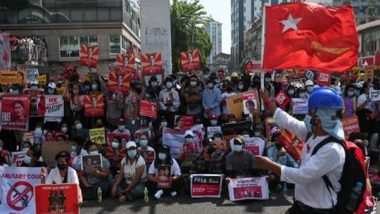 The report said that the arrested suspects include 49 people for setting fire, 61 people for murder, 256 for illegally holding arms and ammunition and 272 people for terror and destructive acts.

A total of 50 small arms, 2,502 rounds of assorted ammunition, 914 homemade guns, 5,947 homemade mines, homemade bombs and related equipment were confiscated along with the arrest of the suspects.

Incidents of explosions and setting fire at public property and schools had taken place in Myanmar's regions and states since last month.

Myanmar declared the state of emergency on Feb. 1 this year and the state power was transferred to the Commander-in-Chief of Defence Services Senior General Min Aung Hlaing. (ANI/Xinhua)