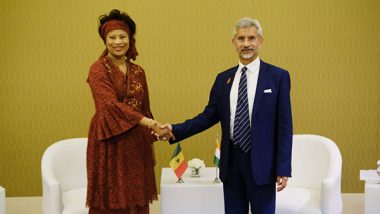 Both the leaders held talks on the sidelines of the G20 Foreign Ministers' Meeting in Indonesia.

"Nice to catch up with FM @SantiagoCafiero of Argentina. Following up on our recent meetings in New Delhi and Munich," he said.

"Good to see FM Naledi Pandor of South Africa in Bali. Look forward to hearing her at the G20 FMM," he said further in the tweet.

India's representation at G20 summits has been led by Prime Minister Narendra Modi since 2014.

External Affairs Minister also met with the European foreign policy chief Josep Borrell in Bali where they discussed the fallouts of the Ukraine conflict along with acknowledging progress in other bilateral engagements including Free Trade Agreement (FTA) negotiations.

Recently, the first round of negotiations for India-EU Trade and Investment Agreements has been concluded and the second round of talks is scheduled to take place in Brussels in September this year. (ANI)