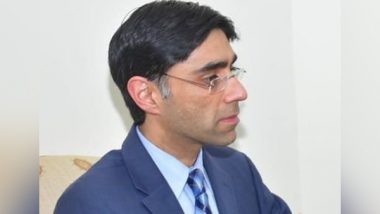 Nawaz Sharif and Afghan officials, during their meeting on Friday, noted that "strengthening democracy" will put both neighbours on the path towards stability and prosperity. Afghan NSA Mohib expressed his "support for the democratic struggle in Pakistan", and former PM Sharif said a strong and stable Afghanistan is "good for Pakistan and the region."

Pakistan NSA on Saturday described the meeting of Kabul officials with Sharif as an attempt to "poison the atmosphere" between the people of two nations.

"Afghan NSA has used vitriolic and unacceptable language against Pakistan and our people. The meeting of Kabul regime officials with MNS in UK is an attempt to further poison the atmosphere between the people of two countries," Yusuf tweeted.

"I can see what Mohib and company were trying to achieve. But what is the other side gaining except trying to embarrass his own country. Deplorable," he said in a subsequent tweet.

The Afghan government has repeatedly accused Pakistan of supporting the Taliban and preventing the Afghan forces from carrying out military operations against them. The ties between the two sides have further deteriorated since the daughter of the Afghan ambassador to Pakistan was briefly kidnapped on her way home on Islamabad earth this month.

In the light of these recent events, former Pakistan PM came under severe criticism for meeting with the Afghan NSA with several federal ministers alleging that PML-N supremo was a "close friend" of every enemy of the country.

Pakistan Minister for Information and Broadcasting Fawad Chaudhry said "this is why sending Nawaz Sharif abroad was dangerous because such people become a part of international plots."

Sharif has been living since 2019 for medical treatment. (ANI)