Get latest articles and stories on World at LatestLY. Pakistan Muslim League-N Vice President Maryam Nawaz on Sunday said that Punjab will wipe out Imran Khan in the upcoming election, local media reported. 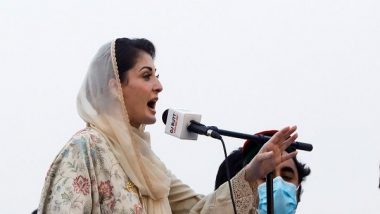 While speaking at the public gathering, Maryam Nawaz said that on July 17, which was earlier scheduled for provincial re-election but now the new date is July 22, "Punjab would wipe out Imran Khan's politics."

"He is the first politician in the country's 70-year history who has asked the 'neutrals' (referring to Army) to bring him back to power," Nawaz said.

Nawaz then criticised former first lady Bushra Bibi and her friend Farah Gogi and said that these two were Khan's "mega projects" whose money trails directly led to Bani Gala.

She also announced that Chief Minister Hamza Shahbaz was going to give the masses "the biggest relief package in the history of Punjab" on July 4. reported Geo News.

Earlier, Nawaz addressed a public gathering in Lahore's PP-167 constituency and claimed that the International Monetary Fund (IMF) had told the coalition government that they don't trust the country because of "fitna" referred to Imran Khan.

Nawaz termed the agreement, which is signed between the Fund and "fitna" Khan, as a "bad deal" and also said that the former Prime Minister took a U-turn by breaching the clauses that Pakistan agreed with the global lender.

During her speech, PML-N Vice President claimed that the party supporters from the constituency present in Green Town are more as compared to the number of people attending Khan's "historic rally" on the Parade ground in Islamabad.

Nawaz said that the coalition government had to make some decisions with a heavy heart, including increasing the prices of petroleum products, because of the wrongdoings of the former Prime Minister Khan.

She further added that if Khan had left something in the reserves, the coalition government would have provided relief to the people.

PML-N President stated that PTI thought that she will not come out to address the rally because of the rising inflation, adding "but I want to tell them that I will stand with the people when times are tough."

Taking a jibe at the former Prime Minister's statement regarding him not being elected to know the price of potatoes and tomatoes, the PML-N leader said: "I am not as insensitive as him [Imran Khan] that I would say I am not here to know the price of essentials." (ANI)