Get latest articles and stories on World at LatestLY. Sheikh Mohamed bin Zayed Al Nahyan was elected as the president of the United Arab Emirates (UAE), the UAE official WAM news agency reported on Saturday. 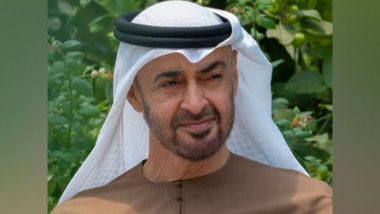 According to it, Sheikh Mohamed has also served as the Deputy Supreme Commander of the UAE Armed Forces since January 2005. He is known for playing a key role in developing the UAE Armed Forces in terms of strategic planning, training, organisational structure and promoting defence capabilities.

Under his leadership, the UAE Armed Forces have emerged as a leading institution that is widely admired by international military organisations.

The rulers of the United Arab Emirates' seven sheikhdoms made the decision at a meeting. It comes after the late President Khalifa bin Zayed Al Nahyan, who had been in office since 2004, died at the age of 73 after a long illness on Friday.

The Ministry of Presidential Affairs announced that there will be 40 days of official mourning with flags at half-mast and three days of closure of ministries and official entities at the federal and local levels and the private sector," the agency wrote on Twitter on Friday.

"The Ministry of Presidential Affairs condoles the people of the UAE, the Arab and Islamic nation and the world over the demise of His Highness Sheikh Khalifa bin Zayed Al Nahyan, the president of the UAE," Emirates News Agency, also known as WAM, said in a statement. (ANI)