United States President Joe Biden on Thursday (local time) hailed the Supreme Court's decision to uphold the Affordable Care Act, known as Obamacare, and termed it as "A big win for the American people". 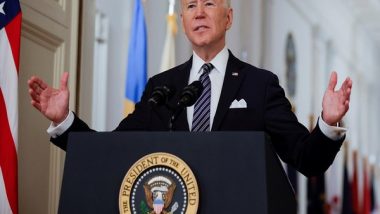 Washington [US], June 18 (ANI): United States President Joe Biden on Thursday (local time) hailed the Supreme Court's decision to uphold the Affordable Care Act, known as Obamacare, and termed it as "A big win for the American people".

President Biden also urged the people to help the scheme spread and reminded them they can sign up for health insurance coverage on the government website.

"It's a big deal that the Affordable Care Act is here to stay. Reminder: You can sign up for health care at http://healthcare.gov--help us spread the word," Biden tweeted.

"A big win for the American people," Biden wrote. "With millions of people relying on the Affordable Care Act for coverage, it remains, as ever, a BFD. And it's here to stay."

"A year ago, more than 1.5 million Americans filed initial unemployment insurance claims. Last week, that number was 376,000. That's more than just an economy on the rise -- those are lives back on track after an unprecedented crisis. That's our economic plan at work," he tweeted further.

In a White House statement, Biden said: "Today's decision is a major victory for all Americans benefitting from this groundbreaking and life-changing law. It is a victory for more than 130 million Americans with pre-existing conditions and millions more who were in immediate danger of losing their health care in the midst of a once-in-a-century pandemic."

The statement said that because of the law, Americans are able to get free preventive screenings that can save their lives and improve their health.

The Supreme Court has upheld ObamaCare against the latest Republican challenge, allowing millions to keep their health insurance coverage amid the COVID-19 pandemic. In a 7-2 decision, the nation's highest court ruled that the GOP challengers lacked standing to sue, in a decision that marks the third major challenge to ObamaCare, to be rebuffed by the Supreme Court in roughly a decade, thus preserving the landmark law and its key protections for millions of people with preexisting health conditions.

The case arose after 18 Republican states brought a legal challenge in 2018 aimed at striking down the ACA. Led by Texas, the Grand Old Party (GOP) challengers focused on the ObamaCare tax penalty meant to induce the purchase of health insurance by most Americans. They argued that former President Trump's 2017 tax cut, which zeroed out the penalty, made that provision unconstitutional.

Without the tax penalty, they argued, ObamaCare effectively lost its constitutional footing, requiring its invalidation by the court. But the justices did not even address those issues in their decision.

"We do not reach these questions of the Act's validity, however, for Texas and the other plaintiffs in this suit lack the standing necessary to raise them," Justice Stephen Breyer wrote for the majority.

However, the lower courts had largely sided with the Republican states but agreed to delay enforcement of the ruling while appeals played out. ObamaCare's defenders, comprising a coalition of 20 blue states and the Democratic-led House, appealed to the Supreme Court, as per The Hill.