Amid the turmoil in Afghanistan post-withdrawal of the foreign forces and Taliban resurgence, President-elect of the United Nations General Assembly (UNGA) and the current Maldives Foreign Minister Abdulla Shahid on Thursday called "terrorism" a "scourge", and said that the Security Council needs to address it soon. 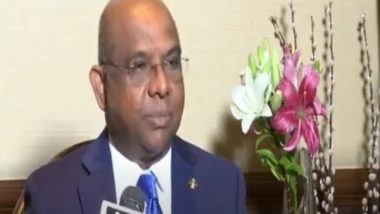 New Delhi [India], July 22 (ANI): Amid the turmoil in Afghanistan post-withdrawal of the foreign forces and Taliban resurgence, President-elect of the United Nations General Assembly (UNGA) and the current Maldives Foreign Minister Abdulla Shahid on Thursday called "terrorism" a "scourge", and said that the Security Council needs to address it soon.

In an exclusive interview with ANI, Shahid, who is on a visit to India, said, "Terrorism is a scourge that has been in this region, in many parts of the world and has taken the lives of many civilians. It doesn't know any religion, borders or humanity. It's evil. We need to address it comprehensively. UN has been slow in coming with the definition, I hope that the definition would be reached soon."

When the President-elect of UNGA was asked about state sponsorship and support of terrorism by Pakistan, Shahid said that the UN deals with terrorism issues in the Sixth Committee, the convention that has been mandated to come out of the Sixth Committee continues to be negotiated.

He reiterated, "So, I'm hoping that the 76th Session will see some progress."

Further, when ANI asked about terrorism as a regional issue, India too is threatened by it. He said, "We're working very closely with India. We've been working for years with India, Sri Lanka and our neighbours, as well as the US and other countries as terrorism and extremism have no borders. Unless we work with everyone, we'll not be able to achieve significant progress".

"We support the membership of India in the Security Council as a permanent member. As President of General Assembly, it would be my role to bring the countries together and try to form a broad consensus on Security Council reform process," he said.

"The reform of the Security Council is a membership-driven process, the members initiated it way back in the 1970s, you would recall that the Maldives was amongst the ten countries who requested the UN to prescribe an agenda item on SC reforms," added Shahid.

On being asked about the kind of support he is seeking from India at the UN, Shahid said, "India is a member of Security Council as a non-permanent member. It is going to chair Security Council as President in August, and again in 76th session during my Presidency India will be chairing the Council. India's role has grown immensely and I hope that as India supported my candidacy, will support my presidency in realising the presidency of hope."

India had supported Shahid's candidature to the top post. This is his first visit to any country after being elected to the prestigious post on June 7. (ANI)