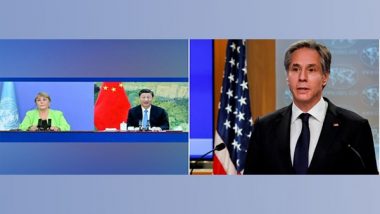 Washington, May 29: The United States on Sunday expressed concern over Beijing's efforts to restrict and manipulate the visit of UN High Commissioner for Human Rights Michelle Bachelet and her team to China that "did not enable a complete and independent assessment of the human rights environment" in the country, including in Xinjiang, where "genocide and crimes against humanity are ongoing".

The statement of the US department came in the backdrop of widespread criticism of Bachelet's six-day China visit, which concluded on Saturday, that it was "not an investigation" and instead she spoke with "candour" in her meetings with the Chinese officials. UN Members Ask China To Respect Human Rights in Tibet, Xinjiang and Hong Kong.

"The United States remains concerned about the UN High Commissioner for Human Rights Michelle Bachelet and her team's visit to the People's Republic of China (PRC) and Beijing's efforts to restrict and manipulate her visit," the State Department said in its statement.

"While we continue to raise our concerns about China's human rights abuses directly with Beijing and support others who do so, we are concerned the conditions Beijing authorities imposed on the visit did not enable a complete and independent assessment of the human rights environment in the PRC, including in Xinjiang, where genocide and crimes against humanity are ongoing," it added.

The United States is further troubled by reports that residents of Xinjiang were warned not to complain or speak openly about conditions in the region, that no insight was provided into the whereabouts of hundreds of missing Uyghurs and conditions for over a million individuals in detention, the state department added in the statement.

"The High Commissioner should have been allowed confidential meetings with family members of Uyghur and other ethnic minority diaspora communities in Xinjiang who are not in detention facilities but are forbidden from travelling out of the region," the statement read.

The statement also noted that the High Commissioner was not allowed access to individuals who were part of the Xinjiang labour transfer program and have been sent to other provinces across China.

The United States remains deeply concerned about the human rights situation in the People's Republic of China, particularly in light of new reports that offer further proof of arbitrary detentions among the more than one million people detained in Xinjiang.

"Survivors and family members of detainees have described cruel treatment that shocks the conscience, including torture, forced sterilization, state-sponsored forced labour, sexual violence, and forced separation of children from their parents," it added.

The US urged China to respect the human rights of Tibetans, those living in Hong Kong, and all others who seek to peacefully exercise their human rights and fundamental freedoms as enshrined in the Universal Declaration of Human Rights.

The country called on China to immediately cease its atrocities in Xinjiang and release those unjustly detained, account for those who have disappeared, and allow independent investigators unhindered access to Xinjiang, Tibet, and across China.

Meanwhile, United Nations human rights chief Michelle Bachelet, who concluded her six-day trip to China, on Saturday said that she has urged Beijing to review its counter-terrorism policies.

In a statement, the UN rights chief also shared the concerns of a number of human rights mechanisms about laws and policies to counter terrorism, radicalism and their application.

Bachelet during her visit discussed the education policies in Tibet with senior Chinese officials and stressed the importance of children learning in their own language and culture.

Since 2020, Chinese authorities in Tibet have implemented the unified Chinese textbook system making Chinese medium education mandatory in schools at all levels and grades.

"It is important the linguistic, religious and cultural identity of Tibetans be protected, and that Tibetan people are allowed to participate fully and freely in decisions about their religious life and for dialogue to take place," the UN rights body chief said in a statement today.

On the conclusion of her recent six-day trip to China, UN human rights chief Michelle Bachelet raised concern over the arrests of lawyers, activists and journalists under the so-called National Security Law in Hong Kong.

The UN rights chief admitted the only prison she visited in the Xinjiang province was not one in which Uyghurs convicted of political crimes are held. "It is scandalous that the UN High Commissioner for Human Rights went to China and East Turkistan without being able to even condemn the government for committing genocide. She has failed her mandate. The Uyghur community deserves accountability more than ever," said Dolkun Isa, president of the Uyghur Congress.

The World Uyghur Congress (WUC) has expressed its serious disappointment to the outcomes of the United Nations High Commissioner for Human Rights, Michelle Bachelet's visit to China, including a trip to Xinjiang.As they feared, human rights groups say this visit has turned out to be a "propaganda opportunity" for China to whitewash its crimes against humanity and genocide against the Uyghur people.

The International Campaign for Tibet (ICT) has expressed disappointment with the UN High Commissioner for Human Rights Michelle Bachelet's visit to China, saying this trip has given a "political victory" to the Communist regime.

According to the Tibetan group, the UN Rights chief adopted the Chinese Communist Party's framing of policies, domestically and internationally.

"The Saturday statement dismissed the rampant disinformation on the Xinjiang region and was also a slap to the US and some Western countries, their media and anti-China forces," said Chinese state media while reporting on the high commissioner's press conference.

Bachelet did not visit Tibet and referred only marginally to the situation in the region, which is regularly ranked as one of the least-free in the world, the group added.