Aging affects everyone eventually, but how you react to the steady march of time makes all the difference in the world. 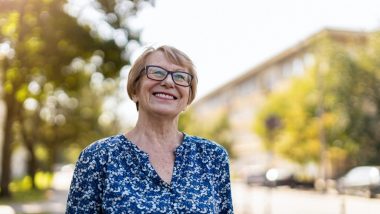 Aging affects everyone eventually, but how you react to the steady march of time makes all the difference in the world.

It’s easy to fall into a fearful or negative mindset about aging, and a recent study reported a whopping 87 percent of Americans admit to a fear of getting old. Interestingly enough it’s not necessarily the higher number that bothers us, but how we imagine we might feel and look during those later years.

While aging in itself is of course inevitable, it’s not written in stone anywhere that aging automatically means declining. People fear how it will affect their physical and mental abilities, and to these issues there are solutions. In recent years there have been incredible scientific breakthroughs, and everyone stands to benefit from this new knowledge.

One of the leaders of this charge against time is Alexy Goldstein, founder of New U Life. Alexy believes that there are certain strategies that can help people maintain optimal health and age gracefully.

“While we can’t quite turn back time yet, we do have the tools at our disposal now to make it feel like you have,” says Goldstein. “We’re not trying to keep our solution a secret, and aim to share what we’ve discovered, as everyone deserves to enjoy longer, healthier, happier lives.”

For as much as we know about the world, why humans age remains something of a mystery to science. Some claim it’s all in the genes, and we can do little to affect the quality of our allotted time. Others say it’s a raw numbers game, and that as our DNA accumulates damage throughout life, and eventually we hit a certain threshold after which it ceases to repair itself.

Whatever the root cause, the effects are that, over time, our bodies stop rebuilding or producing certain hormones at the same level they once did, which leads to a decrease in both cognitive and physical functions. While a healthy diet and exercise routine can work wonders in maintaining what you already have, they lack the ability to raise hormonal imbalances.

The total quantity of time we have might be beyond our reach to control for now, but the quality can clearly be affected by what we choose to do with our time to maintain ourselves. “After thirty years or so, the human body produces less HGH and other vital hormones at the rate it once did,” explains Goldstein.

“This can cause a bit of a panic when you know it is happening to you, and people will go to all kinds of crazy, and sometimes ill-advised, lengths to keep themselves feeling young. I truly believe the name of the game is finding non-invasive ways to maintain your hormones at a natural level. By finding a more subtle approach suited to individual needs, the end result is far more stable and safe.”

All of New U Life’s products are designed to maintain normal, healthy levels of growth hormone, immune function, or overall cognitive function.

“The truth is there is no single solution to feeling old,” says Goldstein, “as it’s usually a combination of factors. Usually though there is one aspect of overall health that tends to lag a little more than others as we age.”

Continues Goldstein, “If left unchecked, this can start a domino effect working against your overall health. Small problems become bigger, and eventually you settle for a lower quality of life, thinking it’s just the new norm for you. By first identifying your need, and then supplementing appropriately, you can soften or outright stop that first domino from falling.”

By being proactive and realistic about aging, one can put the knowledge and tools together for an effective response. When done correctly, the boost can be life changing, and the benefits are more accessible than one might think.

Reaching an older age should be a cause of celebration, not a shameful number from which we run or hide. This becomes easier if you truly feel yourself to be at your best, which is possible by understanding the problem, and responding with proven solutions.

Put it all together and getting older can actually mean feeling better than ever. Goldstein and his team are intent on getting their answers out there for the good of the public at large.

Says Goldstein, “There’s so much that’s been discovered in recent years that can be of benefit to virtually everyone, and it’s our mission to connect these scientific discoveries to individuals in need. The end result is that wonderful feeling of just feeling healthy and happy with yourself. Giving people a chance to find this again is what we’re all about.”

One cannot ignore the scientific forces at play as we age, but by working with rather than against them, a high quality of life can be reclaimed or held far longer than you might imagine possible.

The advances of science are available for everyone to use. By committing to a little research and action, the barriers between you and a better life can be successfully overcome.