Jesse Lund on The Future of Crypto and Why Bitcoin Isn’t About Investing, But Utility

This in turn could cause a dilution in government control over economic policies as their fiat currencies are no longer the standard for trade— and the U.S., for one, would likely be most impacted. For once, currency would be more democratically controlled by users, not the institutions. 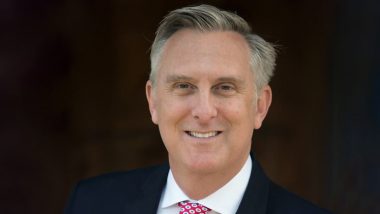 More than 40% of IBM’s revenue comes from the big banks of the world. With the finance giants banking major corporations in the world, they ultimately hold the power. So how can it change? Bitcoin! No, not really, but the concept of bitcoin is certainly the starting point: the decentralization of finance or “DeFi”, as they call it. With the concept of cryptocurrency continuing to evolve at an exponential pace, Jesse Lund says DeFi will disrupt the industry as we know it. And for those wondering when, Lund says the decentralization of the industry has been underway for more than a decade now.

Following his time as the Head of Wells Fargo’s Innovation Labs in 2014, he became fascinated with the world of blockchain and cryptocurrency after conducting extensive research and studies on the sector. Unbeknownst to the general public, through his research Lund quickly realized that the world of crypto and blockchain technology had quietly triggered a financial awakening. Though people around the world are still learning about the concept behind Bitcoin and cryptocurrency, the decentralization of the global financial complex is well underway. And with this financial revolution already unravelling, what Lund can’t stress enough is that people should be taking this time to educate themselves and embrace this innovative and utilitarian disruption of finance.

“There are over two billion ‘unbanked’ people in emerging parts of the world. They are being held back in their creativity and vision because the current system does not have capacity to efficiently connect them to financial services,” Lund says. “Crypto and decentralized finance changes all of that.”

After moving on from Wells Fargo to assume a role as one of the leaders of IBM’s Blockchain division in 2017, Lund fell in love with the concept of how cryptocurrency could irrevocably transform finance forever—and more importantly, for the better. Though it’s been years since his introduction into the industry, he still continues to stress that people are not yet fully realizing how the transition into decentralized finance can break down the barriers that were established ages ago and enforced by the financial institutions of the world—banks. Instead, Lund proposes that with decentralized finance, we have the opportunity to break away from an archetypical circular exchange of wealth, one that continues to perpetuate the infrastructure of established banks and the power they hold.

Lund proposes an even more interesting notion, suggesting that the decentralization of finance and the adaptation to cryptocurrency and blockchain technology, could effectively create a globalization of monetary policy. This in turn could cause a dilution in government control over economic policies as their fiat currencies are no longer the standard for trade— and the U.S., for one, would likely be most impacted. For once, currency would be more democratically controlled by users, not the institutions.

Today Lund is a private investor, philanthropist, and crypto and blockchain advisor, including a board advisor to Marathon Digital Holdings (NASDAQ: MARA), one of the largest publicly-traded Bitcoin mining firms in the world. Even with the burgeoning Bitcoin mania, he notes that the trend of cryptocurrency isn’t about getting rich quick. Instead, he encourages people to look deeper into the mechanics of cryptocurrency to discover its true utility and what it can bring to humanity. For many, the questions remain: when is this financial revolution going to reach the tipping point and when are we going to actually feel “the big shift”?  Lund would say that it’s happening now, before our very eyes. And instead of shying away from this transition, the crypto connoisseur challenges people to embrace it and consider the new emerging uses of this new form of money and its benefits. The possibilities are infinite. And as Lund says, “Welcome to the revolution.”

To learn more about Jesse Lund, visit his LinkedIn page or find him occasionally on Twitter.