Till Tuesday, a total of 298 vehicles were registered across four RTOs Tardeo, Andheri, Wadala and Borivli as compared to 608 last year. There has been a 50 percent dip in vehicle registration on the auspicious occasion of Vijaya Dashami. 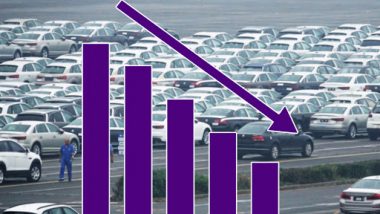 Mumbai, October 9: There has been a 50 percent dip in vehicle registration on the occasion of Dussehra this year. Till Tuesday, a total of 298 vehicles were registered across four RTOs Tardeo, Andheri, Wadala and Borivli as compared to 608 last year during the same time. The highest number of vehicle registration was done at Borivali RTO.

According to a Times of India report, Tardeo was the only RTO where the number of registration was slightly higher than the previous year. Occasions like Dussehra, Gudi Padwa, Diwali and others are considered extremely auspicious days and vehicle sales peaks during this time. The number of two-wheeler registration was the same as last year. Auto Sector Crisis: Toyota Becomes 4th Company After General Motors, Hero MotoCorp and Ashok Leyland to Launch VRS For Permanent Employees During Festive Season.

The slowdown has affected across industries and the auto industry is one of the worst-hit in the economic meltdown. The sales of several auto majors have witnessed a slump. Plants getting shut down due to low demand and job cuts are proof that the auto crisis has deepened.

The ailing automobile sector suffered its worst decline since 1997-98.  Reportedly, the overall passenger vehicle sales dropped by a significant 31.57 percent last month with 1,96,524 units sold as compared to 2,87,198 units in August 2018.

(The above story first appeared on LatestLY on Oct 09, 2019 01:18 PM IST. For more news and updates on politics, world, sports, entertainment and lifestyle, log on to our website latestly.com).