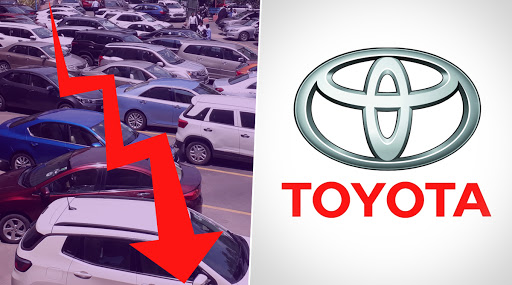 Mumbai, October 3: With the auto sector facing the worst crisis in the last couple of decades and massive job cuts looming large, and reports are arriving that Toyota Kirloskar Motor has voluntarily retirement scheme (VRS) for its permanent employees. By making this move, Toyota has become the fourth company in two months to announce VRS for its permanent employees. The other three automobile companies were General Motors, Hero MotoCorp and Ashok Leyland.

According to a report, shown in the ET Now, Toyota Motors had recently initiated the VRS for its employees who had served more than five years in the firms. However, there is no clarification on what action would be taken on contractual workers as their contracts have not been renewed as of yet by the firm, nor there is any indication. Economic Crisis Grips Auto Sector Completely, Passenger Vehicle Sales in August Dip by 31.57% Vis-a-Vis 2018, Suffer Worst Drop in Over Two Decades.

Data shows that in this fiscal year (FY) 2019-20, from April to September the production of automobile vehicles have dropped by over 35 percent. Though the report of the second quarter of FY 2019-20 is yet to come in the auto sector, over 3.5 lakh people have lost their jobs in Q1 of FY 2019-20.

Here is one video explaining the impact recent announcement by Toyota Motors:

Reports state that the production of Toyota Kirloskar dropped by 37 percent, while Hero Motocorp's production declined by 36 percent. Also, Ashok Leyland decreased its production by 18 percent, and similar was the case of General Motors, which is planning to move out of the country amid an economic crisis in India. Cumulatively, almost all the major carmakers are working on one-third of its production capacity. Economic Crisis Hits Automobile Sector: Tata Motors & Honda Lose Sales By Over 50% in August 2019; Here Are All The Details

Considering the impact of this VRS initiative, though reports of job cuts would decline, people becoming jobless would increase. Experts opine that the most affected from the VRS would be Tier-1 and Tier-III cities of the country. Earlier on September 9, Society of Indian Automobile Manufacturers (SIAM) stated that the overall passenger vehicle sales dropped by a significant 31.57 percent last month with 1,96,524 units sold as compared to 2,87,198 units in August 2018.  Economic Crisis Grips Auto Sector Completely, Passenger Vehicle Sales in August Dip by 31.57% Vis-a-Vis 2018, Suffer Worst Drop in Over Two Decades.

Following the festive season and Union Finance Ministry's latest decision on the corporate tax rate cut, there might be a little revival in the sector. However, not much can be expected as each year India's auto industry sees 15-20 rise growth. After this, things become back to a normal and current revival with these policy changes might not show a positive impact in the coming months. Meanwhile, experts have asked the auto sector giants to remain calm and keep hope.