Consistently ranked one of the best cities in America, Charleston has a rich history and culture to a thriving arts scene, and is home to 250+ tech companies and its digital economy ranks highly: 11th in the nation for high-tech industry output and the fastest-growing mid-sized metro for IT. 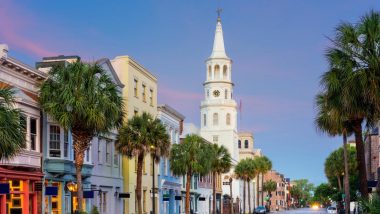 As work becomes less tied to the office or disappears completely, the pandemic is fundamentally changing the appeal, necessity and feasibility of living in a big city. For years there’s been talk of a potential exodus from the San Francisco Bay Area, spurred by the exorbitant cost of living and long, slogging commutes. But before coronavirus, leaving the area meant walking away from some of the best-paying and most prestigious jobs in the world. There are signs now the exodus is finally happening. Silicon Valley, America's signature hub of innovation, may never be the same. But where to go?

Many urban professionals are choosing to escape to the comfort of small towns rather than stay in their cramped flats in crowded cities with coronavirus cases steadily rising. And several of them are not returning. While cities like New York, London and Berlin are known hubs for young creative people, smaller towns across the globe are proving they have even more to offer. These smaller communities are far more diverse — and have far greater potential — than is commonly believed.

To prove that point, The Creative Urban Institute, along with researchers from University of Oregon, created a "coolness index" to rank towns with populations under 130,000, based on 13 factors that are inherently tied to the “digital native” lifestyle. Each city was evaluated based on the number of tech-based startups, festivals and events, coffee shops, microbreweries, high-speed internet providers, farm-to-table groceries, and mom-and-pop stores per 10,000 residents, as well as its street art density, instagramability (hashtags), traffic, higher education, income and the rent inflation over the last year. The index looked at 647 cities across 20 countries. An algorithm then determined which cities ranked highest per capita.

Consistently ranked one of the best cities in America, Charleston has a rich history and culture to a thriving arts scene, and is home to 250+ tech companies and its digital economy ranks highly: 11th in the nation for high-tech industry output and the fastest-growing mid-sized metro for IT.

This Australian town has a picturesque fusion of rural and urban lifestyles that has created a thoroughfare of art galleries, antique stores, yoga studios, organic groceries, and a strong tech startup ecosystem.

Home to some of the world’s most talented technical entrepreneurs and top centers in creative industries, Oss has a developed economy, a comfortable environment, and a mature, innovative ecosystem in which bold ideas are born and implemented.

The town has long been the tech center of Brazil, and has a lively cafe scene. It is home of HackTown, an acclaimed event inspired by South by Southwest (SXSW), which has transformed from a small tech gathering into one of the world’s most trendsetting innovation festivals.

Nestled between mountains and not far from the border with Myanmar, this is not exactly a typical Asian city. Instead of chaos, pollution and insane traffic, Chiang Mai has a more relaxed vibe and a host of cool places to work from.

The old Burgundian town of Leuven is the most famous university city in Belgium. It is the home of 600 year-old ‘KU Leuven’, ranked as the most innovative university in Europe.

The town is South America’s favorite hub for hipsters, and is known for its restaurants, art galleries and beautiful historic buildings. Tiradentes has a diverse and healthy festivals culture, and is a hospitable ecosystem for the creative business.

Popular home for small companies moving out of the Bay area into the beautiful Sierra Mountains, this town is home to more than 30 craft breweries, and most of the beer is made in small farms.

The leading small city for businesses in Central America is about a four-hour drive northwest of Mexico City. The town has a temperate climate, a low cost of living, rich cultural traditions and a focus on the arts.