Training its guns on e-pharmacy companies, Confederation of All India Traders (CAIT) on Monday strongly raised the issue of malpractices being conducted in online pharmacy trade. 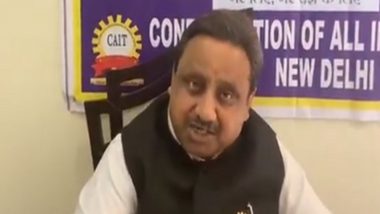 New Delhi, May 23: Training its guns on e-pharmacy companies, Confederation of All India Traders (CAIT) on Monday strongly raised the issue of malpractices being conducted in online pharmacy trade.

CAIT alleged that primarily Pharmeasy, Medlife, 1Mg, Netmeds (now owned by Reliance Group), Amazon (foreign company owned by Amazon) Flipkart (owned by foreign company Walmart) are conducting business practices in contravention of provisions of The Drug & Cosmetics Act, 1940 and misusing the e-commerce landscape by operating on rock bottom prices with 30 per cent-40 per cent discount and free shipping.   CAIT Seeks Action Against Amazon for Insulting Tricolour by Selling Products With National Flag Printed on Them

It's a case of capital dumping in these e-pharmacies by foreign behemoths which is proving extremely detrimental to the future of the lakhs of crores of small chemists across the country . The retail chemists are the last mile connectivity and emergency provisioning is ensured by brick-and-mortar retailers who in turn also provide livelihood to millions of retail pharmacies, their families and employees

The CAIT has once again reiterated while its demand for issuance of a fresh press note in lieu of Press Note 2 of the FDI policy to make Indian e-commerce trade free from all glitches and a competitive level playing field for all stakeholders and formation of a Regulatory Authority to monitor and regulate e commerce business in India.

CAIT National President B.C. Bhartia and Secretary General Praveen Khandelwal said that mushrooming of e-pharmacy is causing huge hardships to the retail chemists and distributors in the wake of anti-competitive practices like capital dumping and deep discounting leading to predatory pricing. Brick and Mortar medicine retailers, including retail chemists and distributors are the first points of contact for needy patients across the country. E-pharmacies with their financial backing by large foreign players/funds have started disrupting brick and mortar retailers due to the unmatched and often unsustainable pricing.

They further said that It is important to note that sale of prescription drugs and medicines through online medium is illegal. The legal regime, under Drugs & Cosmetics Act, 1940, does not permit home delivery of prescription medicines for which a prescription "in original" is required.

Bhartia and Khandelwal said that the e-pharmacies like Pharmeasy and Medlife indulged in deep discounting on their platforms by giving a flat discount of 30 per cent. To capture the market even further, an additional cashback of 20 per cent is extended to customers with free shipping. Effectively, this translated to a whopping discount of around 40 per cent-45 per cent with free shipping.

Bhartia and Khandelwal said that by using consumer data, which is otherwise not available to traditional players, e-pharmacies like Pharmeasy & Medlife (owned by Dharmil Seth and investment from Temasek, etc.) and 1Mg (Prashant Tandon, investment from Sequoia and now slated to merge in Tata Group) Netmed of Reliance, Amazon and Flipkart have offered a minimum discount of 30 per cent at the start of the month and approximately 40 per cent discount at the end of the month to cater to the analysis and resultant trend that spending reduces end of the month.

The CAIT has demanded that beside general e-commerce where rules and policies are being flouted at a high magnitude level, the e-pharmacy has become another trade which is being targeted by these heavily funded companies to capture and monopolised at the cost of uprooting of lakhs of chemists and medicine traders across the country. Therefore, immediate intervention of the government is required to stop this menace.

(The above story first appeared on LatestLY on May 23, 2022 02:51 PM IST. For more news and updates on politics, world, sports, entertainment and lifestyle, log on to our website latestly.com).