Alexx O’Nell: I Often Say Yes to Projects Because of the Team

Alexx O'Nell, who recently released the single Twenty Days, has his hands full with acting projects as well. He will be seen in the films Chehre, Bhoot Police and RRR. He was recently seen in the horror comedy Roohie, where he played an American journalist. He was also part of the Sushmita Sen-starrer web series Aarya. 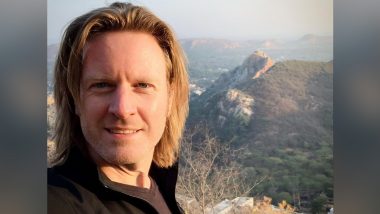 Actor-singer Alexx O'Nell, who recently released the single Twenty Days, has his hands full with acting projects as well. He will be seen in the films Chehre, Bhoot Police and RRR. He says he often signs projects because he is impressed with the team. Aarya: Alexx O’Nell Reveals His Role Is One of the Surprise Elements in Sushmita Sen’s Hotstar Show.

"Sometimes, I say yes to a project solely because of the team that's involved. The perfect examples from early in my career would be Cheeni Kum, which brought me face to face with Amitabh Bachchan and it was directed by R. Balki. There are others like the lesser known Jo Dooba So Paar in which I worked alongside Vinay Pathak. More recently, Chehre allowed me to collaborate with Rumi Jaffery and Emraan Hashmi, Bhoot Police with Pavan Kripalani, and RRR with SS Rajamouli and Alia Bhatt," he told IANS. Alexx O’Nell Is Nervous and Excited About His Next Single Music Video ‘Twenty Days'.

He adds that this gives him a chance to learn from others. "I'm a strong believer that, as long as you remain open to learning from those around you, one of the best ways to better yourself as an actor is to surround yourself with the best actors, directors and DOP's you can. Sometimes that means taking the opportunities in front of you and making the most of them, instead of waiting for meatier roles," he says.

Check Out the Video of Twenty Days Below:

He was recently seen in the horror comedy Roohie, where he played an American journalist. He was also part of the Sushmita Sen-starrer web series Aarya. Meanwhile, he says Twenty Days is different from the rest of the work that he has done.

"If (his earlier track) Still On My Mind was the song of mine that listeners told me they liked the quickest, in time Twenty Days invariably became the song they loved the most. With a lengthier and meandering melody, Twenty Days takes its time to build from a single piano key to a soaring symphony. And then, in the bridge, it breaks down to a simple acoustic guitar and solo violin. That delicate quiet in between two roaring choruses, makes the violin's 11 haunting notes just breathtaking... It's a journey that comes in waves and just washes over you," he says.

He adds: "Just like Still On My Mind and A Bhagavad Gita Song, what I'm most looking forward to with Twenty Days is hearing what it comes to mean to those that listen to and watch it. To me, one of the beautiful things about music is that it takes on a unique meaning for every single person that experiences it, because no one comes to it with quite the same perspective."

(The above story first appeared on LatestLY on Apr 02, 2021 10:31 PM IST. For more news and updates on politics, world, sports, entertainment and lifestyle, log on to our website latestly.com).