A R Rahman Birthday Special: Did You Know The Musician Copyrighted Jai Ho From Slumdog Millionaire That Won Him An Oscar?

A R Rahman's Jai Ho in Slumdog Millionaire became an anthem that not only made Indian sway to its beats but the whole world as well. But did you know Jai Ho was copyrighted under A R Rahman's name? 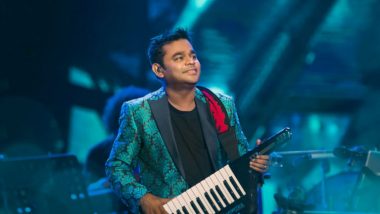 Slumdog Millionaire is a highly celebrated film in India. Not only because it was the story of an underdog who had extreme experiences in life to reach the hot seat but also for the fact that the film saw unbelievable responses worldwide. A R Rahman's music became an anthem. Jai Ho has found global recognition and also fetched the composer his first Oscar. Guess that made Rahman copyright the term under his name. Yes, he did that and it came to light due to a feud.  A R Rahman Bids Goodbye to Sean Connery on ‘behalf of All Film Industries in India’

Back in 2013, when Salman Khan was gearing up to release Jai Ho, the name became a matter of much discussion between Sohail Khan, the producer, and Rahman. The film was rumoured to be titled Mental first and then Azad but later Khan settled for Jai Ho. A Mumbai Mirror report suggests that he was told to get in touch with Rahman to get the title. The daily quoted Rahman's lawyer Dina Dattani, "The trademark 'Jai Ho' is a registered trademark owned by Mr. Rahman and accordingly the use of the trademark in film, music or any other categories in which it is registered globally, requires an official license from Mr. Rahman."

What happened to the feud? The film is still called Jai Ho. So our guess is, it was sorted out.

Legend stayed away from the virus even before Corona. pic.twitter.com/SRMV1jfjsO

Well, that's not the point here. The fact that Rahman copyrighted Jai Ho is such an amazing thing.

(The above story first appeared on LatestLY on Jan 06, 2021 08:10 AM IST. For more news and updates on politics, world, sports, entertainment and lifestyle, log on to our website latestly.com).