Even as the Laal Singh Chaddha trailer is set for launch during the IPL final, Aamir Khan is going ahead with preperations for the big night seriously for his role as event host. 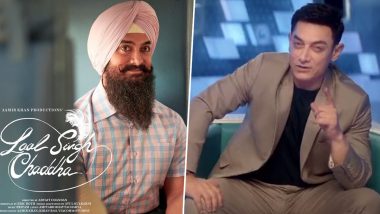 The videos shared by the makers of 'Laal Singh Chaddha', indicate Aamir Khan is also hosting the event where he will have a dialogue with world renowned cricketers including Harbhajan Singh. Aamir can be seen taking tips from a crew member of the TV channel, as to what kind of questions he should be asking of Harbhajan. Aamir then decides to go ahead and test his interviewing skills, resulting in a hilarious situation. Laal Singh Chaddha: Trailer Of Aamir Khan, Kareena Kapoor Khan’s Film To Be Released On 2022 IPL Finale.

This is for the first time that a trailer of an upcoming movie is being unveiled at a mega cricketing event on Indian television. The excitement amongst cricket and cinema lovers has made 'Laal Singh Chaddha' the most talked about topic on the Internet. The event is to be hosted by Aamir Khan from 6 p.m. onwards on May 29 on the Star Sports network and Disney+ Hotstar.

(The above story first appeared on LatestLY on May 26, 2022 04:45 PM IST. For more news and updates on politics, world, sports, entertainment and lifestyle, log on to our website latestly.com).