OH. MY. GOD! Priyanka Chopra and Nick Jonas were snapped on a dinner date and we just can't keep calm! 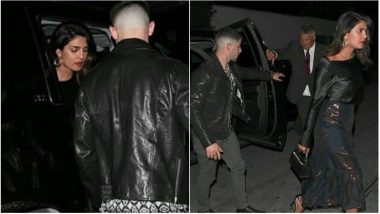 OH. MY. GOD! Priyanka Chopra and Nick Jonas were snapped on a dinner date and we just can't keep calm! The rumours about Priyanka and Nick dating have been doing the rounds since the last few days and these latest photos have only added fuel to fire. We can't help but wonder how lovely they look together. In these recent photos, Nick is seen opening the door for his lady as she steps out of the car. clearly, chivalry at its best! PeeCee looks damn hot in an all-black outfit. We think it is just perfect for a Friday date night!

During an international event earlier, when Priyanka was clicked by the shutterbugs chilling with the Hollywood actor-singer, she dismissed the rumours of them being a thing. However, the latest pictures doing the rounds on the internet are hinting at the opposite!

Recently, a pic of the Baywatch actress cuddling with Nick went viral on the internet and the Twitterati already gave a thumbs up to the alleged couple. Most of them even called Priyanka and Nick the 'hottest couple of 2018'! Now, this is so cool!

Earlier, when Jonas was asked about his bonding with the desi girl, he said, "We met through a mutual friend who she did ‘Quantico’ with, this guy Graham and we met up like in New York the first time and the same day I think we found out that we are both going to the MET gala with Ralph Lauren. And as strange as it sounds but we couldn’t have planned it. We just had a great time. She’s a lovely person and I’m dying now to go to India."

(The above story first appeared on LatestLY on Jun 02, 2018 10:06 AM IST. For more news and updates on politics, world, sports, entertainment and lifestyle, log on to our website latestly.com).