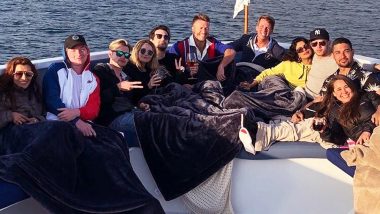 Are Priyanka Chopra and Nick Jonas dating? That's the only question everyone is asking right now! We all know that PC is quite guarded about her personal life. She has become well equipped with the way of dodging the questions about her love life with witty answers. During an international event, when Priyanka was captured chilling with actor, singer Nick Jonas, she dismissed the rumors of them being a thing. However, the latest pictures doing the rounds on the internet are hinting the opposite. The Baywatch actress was snapped cuddling with Nick and the Twitterati has already given a thumbs up to them, even called them 'hottest couple of 2018'!

The fans could not hide their curiosity and excitement over these viral pictures. PeeCee is seen spending quality time with Nick on a yacht, with some more friends with them. In this video, we can also see them enjoying the match together. Twitterati is going crazy with speculations.

PC and Nick at the Dodgers Game...

@priyankachopra and @nickjonas at the #Dodgers game today. 😍 pic.twitter.com/3J91P9phzq

Here's What Fans Have to Say...

Just saw Priyanka Chopra with Nick Jonas at the dodger game, predicting them to be the hottest couple of 2018.

I am not saying Priyanka Chopra and Nick Jonas are a thing. But if they are, can I be the third wheel?

I'm here and I ship Priyanka Chopra and Nick Jonas. 💖

Earlier, when Jonas was asked about his bonding with the desi girl, he said, "We met through a mutual friend who she did ‘Quantico’ with, this guy Graham and we met up like in New York the first time and the same day I think we found out that we are both going to the MET gala with Ralph Lauren. And as strange as it sounds but we couldn’t have planned it. We just had a great time. She’s a lovely person and I’m dying now to go to India." So, do you agree with the fans? Do let us know in the comments section below.

(The above story first appeared on LatestLY on May 29, 2018 03:11 PM IST. For more news and updates on politics, world, sports, entertainment and lifestyle, log on to our website latestly.com).