Ajay Devgn Birthday Special: From Drishyam 2, Runway 34 to Raid 2, Every Upcoming Movie of the Bollywood Superstar

Ajay Devgn has a number of interesting projects under his kitty and let's not waste any more time and take a quick look at Ajay Devgn's upcoming movies list below. 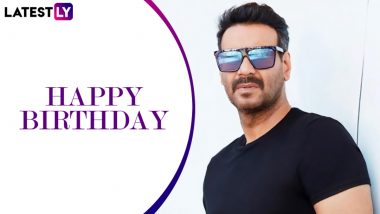 Ajay Devgn turns a year older today and the dialogue delivery maestro has some interesting upcoming movies lined up for release. The actor is known for his talking eyes and his recent releases RRR and Disney+ Hotstar show Rudra: The Edge of the darkness are well received as well. Ajay Devgn made his impressive Bollywood debut with Phool Aur Kaante and went on to be a part of hit films like Ishq, Vijaypath, Naajayaz, Zakhm, Lajja, The Legend of Bhagat Singh, Gangaajal, Once Upon a Time in Mumbaai to Tanhaji his last solo blockbuster outing. Runway 34 Song Mitra Re: First Track From Ajay Devgn, Amitabh Bachchan and Rakul Preet Singh’s Film To Be Out on April 2! (Watch Video).

Fans of the Bollywood star follow his films passionately and on the superstar's birthday let's take a look at every upcoming Ajay Devgn movie which is set to release in the coming years. The Golmaal star has a number of interesting projects under his kitty and let's not waste any more time and take a quick look at Ajay Devgn's upcoming movies list below. Runway 34: Makers Introduce Ajay Devgn As Captain Vikrant Khanna And Amitabh Bachchan As Narayan Vedant (View Posters).

Ajay Devgn is all set to lead the biopic of Syed Abdul Rahim, a legendary football coach who transformed India’s golden era from 1951-1962. Helmed by Amit Sharma and backed by Zee Studios, Boney Kapoor, Akash Chawla, and Joy Sengupta, Maidaan is slated for June 3 release. The film's music is composed by AR Rahman.

Ajay Devgn to star and direct Amitabh Bachchan in his upcoming movie Runway 34 which was earlier titled Mayday. Youtube roaster Carryminati is all set to make his Bollywood debut with this big film. The film's trailer has already garnered 30 million views in just 3 hours and is one of the anticipated films of the year. Runway 34 also stars Rakul Preet Singh and Boman Irani and is slated to release on April 29.

Ajay Devgn has recently started filming for the sequel of his 2015’s suspense thriller Drishyam and the shoot began in mid-February this year. Ajay Devgn, Shriyan Saran, Ishita Dutta, Tabu are all set to reprise their roles in this Abhishek Pathak directorial.

Ajay Devgn is teaming up with Neeraj Pandey for Chankaya, an epic period drama with Ajay as the lead. Reports also suggest that the Bollywood star will go bald for this iconic role. Speaking about the project Manoj Muntashir said Chanakya will be made appealing to the current generation and will resonate with today’s era.

Indra Kumar and Ajay Devgn are reuniting once again for a comedy entertainer titled Thank God, Sidharth Malhotra and Rakul Preet Singh will star alongside Devgn in the film. The film is all set to hit theatres on July 29.

Sooryavanshi director Rohit Shetty teased the viewers about the third instalment of the Singham franchise towards the end of the film. Ajay Devgn is all set to reprise his cop role for the third instalment and reports suggest that it will be shot in the backdrop of Kashmir. No official announcement about the project is made yet.

Ajay Devgn and Ranbir Kapoor are coming together for a Luv Ranjan movie was an announcement made in 2019 and fans of the Shivaay star are excited since then. The rumours that the film is shelved was also denied by the filmmaker back in 2020 but as of now no official announcement regarding the filming of the project is made yet.

A sequel to Ajay Devgn and Ileana D'Cruz's 2018 hit Raid is officially in works. Reports say that the movie is all set to be based on true events of multiple raids at the houses and factory of perfume trader Piyush Jain in Kanpur and Kannauj.

LatestLY and the team wish Ajay Devgn a blessed birthday! Keep entertaining your fans with your projects in the years to come.

(The above story first appeared on LatestLY on Apr 02, 2022 09:01 AM IST. For more news and updates on politics, world, sports, entertainment and lifestyle, log on to our website latestly.com).