Anurag Kashyap and Anil Kapoor bicker so much that three trailers of AK Vs Ak are released. But the one we like is the one which seems quite interesting and real. 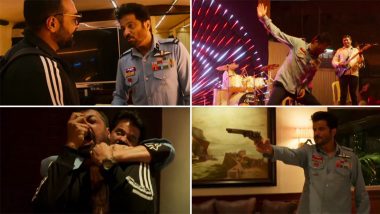 Anurag Kashyap and Anil Kapoor have been bickering on Twitter with each other since yesterday. All that was a run-up to the trailer launch of AK VS AK which has both of them in it and is directed by Vikramaditya Motwane. The launch was broadcasted LIVE by Netflix on their Youtube page. Anurag and Kapoor continue to bicker at the event as well and release three trailers of the same movie. If we have to pick, we liked the first one. The movie has been shot like real footage of a haggard Anil Kapoor going pillar to post to find his kidnapped daughter Sonam Kapoor. A ‘War’ Before AK vs AK: Throwback to When Hrithik Roshan and Tiger Shroff Got Involved in a Promotional Twitter Banter

Kashyap knows where Sonam has been taken but Kapoor has just until sunrise to find his daughter. The trailer is quite real and raw because Anurag says everything he will feel will be real and not scripted.

Anil Kapoor and Anurag Kashyap wanted to prove who is bigger than the other and so, two more versions were shown at the trailer, appeasing each one of them. This is the same film that was supposed to be called AK VS SK before with Shahid Kapoor alongside Kashyap. But that didn't work out and now it's titled AK Vs AK. We hope the movie which streams on Netflix from December 24 will be as intriguing as the trailer.

(The above story first appeared on LatestLY on Dec 07, 2020 05:07 PM IST. For more news and updates on politics, world, sports, entertainment and lifestyle, log on to our website latestly.com).