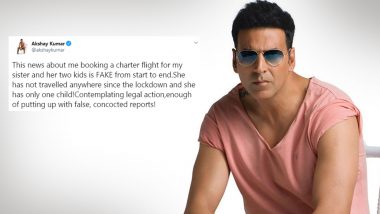 Actor Akshay Kumar has been in the news ever since the COVID-19 lockdown kicked into place for not only contributing to both Prime Minister Narendra Modi's PM Cares Fund and CM Relief Funds, but also for reaching out to a lot of needy in the society and helping out. And while the good samaritan's efforts are being lauded by one and all, Akshay is one unhappy man right now. Akshay Kumar Continues with his Generosity, Donates Rs 45 Lakh to CINTAA -  Read Details.

Recently, a portal published an article wherein it was mentioned that Akshay had booked an entire flight for his sister, her two children and their maid to travel from Delhi to Bombay. A source close to India Forums, was quoted in the article as saying, "This morning Akshay booked a whole passenger flight and got it converted into a Charted Flight for his sister and her two kids, a daughter and a son, and her maid to fly to Delhi from Bombay. The flight had a capacity of 186 passengers but only 4 travelled. Apart from his 3 family members and their maid, the flight just had four crew members taking care of their needs and two pilots and one ACM (Additional Crew Member). There was no special treatment given to them except for the regular protocol of sanitization process and safety measures related to COVID 19 that have been laid down by the Government. However, one loader was assigned for them to carry their baggage." Akshay Kumar Issues Statement Informing About the Fake Casting for the Song ‘Filhall Part 2’ (Read Deets).

However, Akshay Kumar is not happy with this piece of news that is circulating. Akki took to Twitter to state that these were fake reports.

This news about me booking a charter flight for my sister and her two kids is FAKE from start to end.She has not travelled anywhere since the lockdown and she has only one child!Contemplating legal action,enough of putting up with false, concocted reports! https://t.co/iViBGW5cmE

He also stated that his sister has not travelled anywhere since the lockdown began and also that she has only one child. Akshay, in his tweet also said that he was 'contemplating taking legal action' and that he has had enough with false and concocted reports.

(The above story first appeared on LatestLY on May 31, 2020 09:00 PM IST. For more news and updates on politics, world, sports, entertainment and lifestyle, log on to our website latestly.com).