Amitabh Bachchan Shares a 'Then and Now' Post Showing What Changed From Kabhie Kabhie to Gulabo Sitabo With an Amazing Caption! 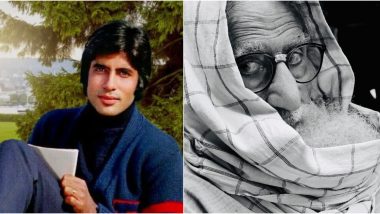 Bollywood's megastar, Amitabh Bachchan has truly come a long way and seen Bollywood in all its phases. From defining the term 'Angry young man' in films to becoming a romantic hero to taking up challenging roles like Paa, he has done it all. The actor is now also one of the biggest stars in the country to have his upcoming film for a direct OTT release. With Gulabo Sitabo directly releasing on Amazon Prime, it does look like Mr Bachchan has seen it all in B-town. The actor recently took to Twitter to share a then and now picture relating to the month of May where he shared pictures of himself from Kabhie Kabhie and Gulabo Sitabo. Amitabh Bachchan Recalls Filming for Amar Akbar Anthony and Two Other Films Simultaneously at RK Studios.

Sharing the pictures, the actor wrote, "Srinagar, Kashmir .. ‘KABHI KABHIE’ .. writing the verse for the song ‘kabhi kabhi mere dil mein khayaal aata hai ..’ AND .. Lucknow, month of May .. 44 years later ( 1976 to 2020 ) Gulabo Sitabo .. and song playing .. ‘ban ke madaari ka bandar."The actor wrote 'then and now' with his post."Kabhi Kabhi" has been one of the biggest songs of his career. The romantic melody has been enjoyed by generations. As for his upcoming film Gulabo Sitabo's song, "Madari ka Bandar" is a suitably funny number for the film. 42 Years of Don: Amitabh Bachchan Reveals Why None of the Distributors Were Willing to Accept His Film’s Title for This Funny Reason.

Amid the coronavirus quarantine, Mr Bachchan has been taking a trip down memory lane and has been sharing some old pictures from his Bollywood films. He recently also celebrated 47 years of his film, Zanjeer. Gulabo Sitabo has been directed by Shoojit Sircar and also stars Ayushmann Khurrana in a lead role. The film is all set to premiere on June 12 on Amazon Prime Video.

(The above story first appeared on LatestLY on May 28, 2020 08:33 AM IST. For more news and updates on politics, world, sports, entertainment and lifestyle, log on to our website latestly.com).