The title of the movie, directed by Rumi Jaffrey, was revealed to be Chehre on May 10. 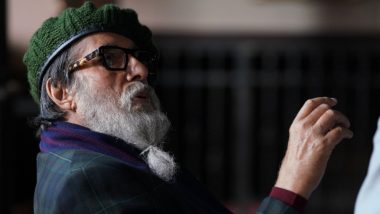 If we all could be half as creative and active as Amitabh Bachchan at his age, we'd have a life well-accomplished. The actor recently stunned us with the mystery-thriller, Badla. And while Thugs of Hindostan might not have been received well, we have to appreciate Big B's energy in the action-adventure. Amitabh is all set to woo us once again with a new avatar. The actor has started shooting for his mystery thriller with Emraan Hashmi. His look from the film has made its way to social media and we are totally loving it. Mother's Day 2019: Amitabh Bachchan Croons a Moving Song 'Maa' Celebrating Motherhood (Watch Video).

The title of the movie, directed by Rumi Jaffrey, was revealed to be Chehre on May 10. The new pictures from the sets, shows Amitabh in quite a peculiar look. He looks like a French artist with his beard tied. Reports suggest that he is playing a lawyer once again after Pink and Badla. Amitabh Bachchan to Play a Transgender in Akshay Kumar’s Kanchana Hindi Remake Titled Laaxmi Bomb?

The movie went on floors on May 10. Producer of the film, Anand Pandit, said in a press statement, "We are extremely excited to commence the shoot from today and looking forward to seeing Mr Bachchan and Emraan onscreen for the first time.”

This year, Emraan Hashmi will also make his digital debut with the Netflix original web-series, Bard of Blood. Amitabh Bachchan has Dharma's Brahmastra for us next year.

(The above story first appeared on LatestLY on May 12, 2019 04:23 PM IST. For more news and updates on politics, world, sports, entertainment and lifestyle, log on to our website latestly.com).