It's Ashton Kutcher's birthday today, the man is one of our favourite lover boys from Hollywood even when he has outgrown all his romantic flicks. But it seems the guy also has a soft spot for Bollywood. Why do we say so? Check him out dancing to Shah Rukh Khan's Chammak Challo at a wedding. 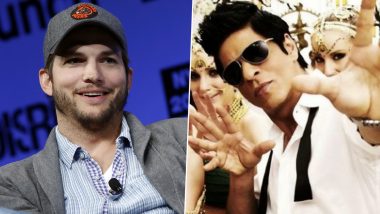 Ashton Kutcher is still one of India's favourite lover boys from Hollywood. Be it A Lot Like Love or What Happens In Vegas or the wildly famous The 70's Show, we just love to love him. But he is also a controversial actor. He says and does a few things which puts him in a spot very often. He had turned himself into a Bollywood producer for an ad and got slammed mercilessly for being racist. He does paint himself brown, so that's on him. A few years later, he turned up at a wedding event dancing on Shah Rukh Khan's Chammak Challo from Ra.One. Did Ashton Kutcher React To Ex-Wife Demi Moore’s Cheating Allegations Calling It Illusory Truth?

(The above story first appeared on LatestLY on Feb 07, 2021 09:20 AM IST. For more news and updates on politics, world, sports, entertainment and lifestyle, log on to our website latestly.com).