Axone Movie Review: Sayani Gupta, Lin Laishram Shine in This Bittersweet Dramedy About a Pungent Dish and An Even Pungent Racism

Axone is a dramedy directed by Nicholas Kharkongor and produced by Yoodlee Films. The film stars Sayani Gupta, Lin Laishram, Vinay Pathak, Rohan Joshi, and Dolly Ahluwalia. The film premiered at the London Film Festival on 2 October 2019 and is streaming now on Netflix. 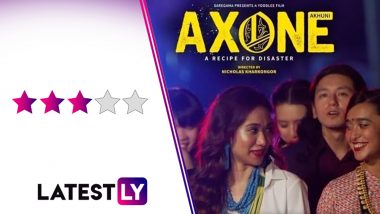 Axone Movie Review: Nicholas Kharkongor's second-feature length film, Axone, had premiered during London Film Festival 2019 and is now finding its way to Netflix. Axone is a very special film - the kind of movie you really want to root for being an underdog. No other Hindi movie in recent times have put the spotlight on the North Eastern community as much as this one. In an industry accused of its lack of diversification, Axone feels like a refreshing wave of breeze, albeit it sputters at a few places. Sayani Gupta: Don’t Want to Be Seen in Films Where I Am Just a Pretty Prop.

Axone derives its name from a special dish from Nagaland that is made of pork and has a pungent smell. That's the dish Upsana (Sayani Gupta) and Chanbi (Lin Laishram) want to make for their friend who is getting married in the evening. The only problem is, they are presently staying in South Delhi and the pungent smell of the dish could offend their neighbours.

The film follows these two girls and their other friends, including Upsana's employer and boyfriend Zorem (Tenzin Dalha), as they figure out how to make the dish away from the eyes and noses of others. In the process, we are given glimpses of the racist behaviour these characters have to suffer because of their ethnicities.

The timing of the film's release could never be apt, as we have read reports where members of North-Eastern community are spit upon by idiots, blaming them for coronavirus.

From incidents of mob-lynching to cat-calling in streets, Axone tries to work around these crimes meted out against the community while sticking to its main narrative. It is good to see the film tackle these concerns and issues headon. Not sure how far the message will spread, but the fact that the baby steps have been taken is appreciative enough. But good intentions doesn't always make for a good movie. Just like good ingredients don't always make a good dish. The expertise of the cook and the recipe are also equally important.

Does Nicholas Kharkongor stir the pot in the right way? Not always, but the dish turns out to be decent.

Axone shines the best when it sticks to the main thread. The misadventures of the girls as they figure out how to make the dish is humorous, as well as poignant.

The opening scene sees them buy the ingredients and the way it is shot in eerie atmosphere, makes it feel as if they are doing drugs or something. The girls try to make the dish in their apartment, only for the landlady (Dolly Ahluwalia) to drive them away. Vinay Pathak Is All Set To Make Us Laugh With His Next Titled Axone!

Their struggles also bring out their own emotional skeletons out of the closet. Like, Upsana still being treated like an outsider by her group, but she isn't completely 'North Eastern'. Or, Chanbi's annoyance with her boyfriend Bendang (Lanuakum Ao) not standing by her during an incident with a miscreant, building up in her so much that she has a panic attack. The dish is important to them and the reason is twofold. One is for emotional aspect, the reason which I do not want to mention here for SPOILER purpose. But it did made me realise that there are so many customs in the country that I was quite clueless of.

The other reason is the girls' determination to have the right to make a dish in a country they live in. This aspect made me smile wryly, for it is something everyone, especially nonvegetarians, had faced at one point of their life, while migrating to another city. I was also glad that Axone wasn't made of beef. That would have led to an outrage of another kind!

The movie is also funny in parts, mostly courtesy, Shiv (Rohan Joshi, a scene-stealer), their Delhite neighbour who tries too hard to be a part of the group. Shiv, inadvertently, also brings out an inherent issue with Chanbi and her friends - while they have banded together because of their common ethnicities, they are also resisting including those who they perceive to be outsiders.

At one point, one character even calls Shiv a 'f**king Indian', making the latter wonder if they never consider themselves part of the country. It's another matter that a couple of scenes back, he himself says 'Hindi Cheeni Bhai Bhai' (Indians Chinese brothers ). Shiv represents the well-meaning part of the country, in trying to make other communities feel inclusive, we make them feel like outsiders in the process.

There are quite a few moments in the film, where I couldn't stop smiling. The couple of scenes where Shiv encounters his girlfriend while helping the gang are hilarious. Vinay Pathak, who plays his father, is wonderful in his brief role. Dolly Ahluwalia's last scene will surprise you. I clapped hard when one of the girls' friends shuts down an uncle who makes a racist remark on them.

My favourite moment is when a character sings "Uthe Sabke Kadam" - a song that calls for inclusivity - in his native accent, and he is joined in his singing by someone he thought to be an outsider. In these troubled times where we are losing our secular identity, that's the India I crave to return to.

It also brings us to the problems that make Axone restrict itself to a decent watch and not more. The movie takes some detours to address the racism part, not all of which works. Like for example, Axone's treatment of Bendang, the film's most tragic character, should have been better. Here, it feels more like a distraction to the story. There should have been more focus on Upsana and Chanbi's friendship, because Axone is a much better movie when it does that.

The movie also suffers from tonal issues, when it struggles to be funny, serious and dark, all at the same time, and creates pacing problems for itself. There are also continuity problems - Chanbi's hairstyle changes in a matter of seconds, before it reverts.

Performance-wise, most of the actors, including the newcomers are decent. However, the movie belongs to the underrated Sayani Gupta, who is fantabulous as the simplistic, naive Upsana. It is incredible to see her range as an actress, nailing the accent and her diction right (or at least believable, I am no expert here) - just as she was believable as a tribal girl in Article 15 or the posher sports analyst in Inside Edge. This is an act that shows you don't need prosthetics to pass yourself as a Northeastern,the makers of films like Mary Kom, take note please! As her friend, Lin Laishram is confident and natural, especially in the scenes that are more intense.

BTW, what's Adil Hussain doing in this movie? He doesn't even have a single line!

- Some Funny and Poignant Turns

A movie like Axone is a welcome change in a Punjabi-fied and recently, UP-fied, Bollywood, even if it is set in Delhi. It does struggle in maintaining its tone and feel, but the cast and its good intentions make it worth a watch. Axone is streaming on Netflix.

(The above story first appeared on LatestLY on Jun 12, 2020 12:05 AM IST. For more news and updates on politics, world, sports, entertainment and lifestyle, log on to our website latestly.com).