Bappi Lahiri Birth Anniversary: 5 Songs Of The Legendary Composer That Prove He Is More Than Just Disco King

Bappi Lahiri composed songs that are milder, heart-touching and extremely moving. So today, we decided to let the softer composer win over the disco king. 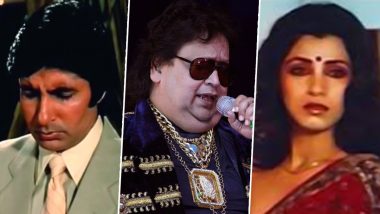 Bappi Lahiri was often known as the disco king or the golden composer for his love for shiny metal. While it shows how the legendary man is still relevant in this day and age of auto-tune arrangements, it also overshadows the fact that Lahiri was more than that. We often remember his Disco Dancer songs or the ones that use heavy instruments. But Bappi Lahiri has composed songs that are milder, heart-touching and extremely moving. So today, we decided to let the softer composer win over the disco dancer. Govinda Remembers Bappi Lahiri, Says 'Would Have Never Become a Star Without Bappi Da's Songs'.

If the lyrics are soul-stirring, the composition is simply amazing.

What do we say about this film? If loneliness and heartbreak ever had a melody, this is it in the voice of the immortal singer Kishore Kumar

If we ever need a goodbye song, we always return to this Bappi Lahiri-Kishore Kumar combo to feel the longing.

This is such a pure and powerful melody that defines beauty in its purest form. Bappi Lahiri Birthday: Did You Know The Hit Composer-Singer Dubbed For Elton John In Kingsman: The Golden Circle And Tomatoa In Moana? (Watch Videos).

When is the last time someone likened you to a beautiful Ghazal? Never right? Bappi Lahiri's this composition will make you feel the pang of never been seen as kisi shayar ki ghazal.

So next time you call Bappi Lahiri just as Disco King, think again and keep listening.

(The above story first appeared on LatestLY on Nov 27, 2022 08:10 AM IST. For more news and updates on politics, world, sports, entertainment and lifestyle, log on to our website latestly.com).