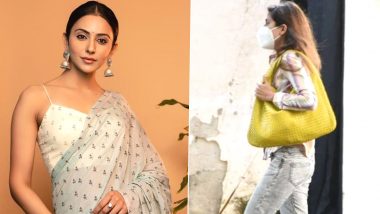 Fashion designer Simone Khambatta was questioned by the Narcotics Control Bureau (NCB) for over four hours on Thursday in the drugs angle related to Bollywood actor Sushant Singh Rajput's death case. Khambatta's name cropped up after her alleged drug chats came to the fore. Sushant's former manager Shruti Modi was also being interrogated in a drug related case during the day, officials said. Sushant Singh Rajput Death: Sara Ali Khan Leaves For Mumbai From Goa After NCB Sends Her Summons In The Drug Case

Bollywood actor Rakul Preet Singh, who was also summoned for questioning on the day, skipped the NCB summons, officials said. Earlier in the day, an NCB official said that Rakul's summons were issued on Wednesday and on Thursday morning she acknowledged them and updated her latest address also. SSR Case: NDPS Special Court Allows NCB to Question Showik Chakraborty, Dipesh Sawant in Taloja Central Jail

An NCB source said that Rakul will be joining the drug law enforcement agency probe on Friday morning. According to NCB officials, Khambatta arrived at the NCB office here for questioning around 10.15 a.m. and left around 2.30 p.m. Khambatta was questioned about her alleged chats to procure drugs for consumption, the sources said. Shruti Modi arrived for the third at the NCB office earlier and her questioning is ongoing, the agency sleuths said.

The NCB registered a case under the NDPS Act on the request of the Enforcement Directorate (ED) that has been probing the money laundering charges into the June 14 death of Sushant. The narcotics probe agency registered the case after a few alleged chats of Sushant's girlfriend Rhea Chakraborty, her brother Showik, Sushant's house manager Samuel Miranda discussing drugs came to the fore.

The NCB has so far questioned Rhea, Showik, Modi, Sushant's talent manager Jaya Saha, Kwan talent management agency CEO Dhruv Chitgopekar, 'Udta Punjab' Producer Madhu Mantena Varma among several others. Responding to a question on the number of cases the drugs law enforcement agency is probing, an NCB official said: "The agency has registered two separate cases under the NDPS Act. There are few aspects in both cases which warrant examination of both Sara and Shraddha, so they will be examined in both cases."

The NCB has already arrested Rhea, Showik, Miranda, Sushant's personal staff Dipesh Sawant and 16 others in the case so far. Rhea, Showik, Miranda and Sawant were in judicial custody. The official said while the alleged chats of Deepika with her manager Prakash discussing drugs in October 2017 brought them into the probe net, Shradhha and Sara's role came to the fore following the questioning of Saha. The NCB is the third federal agency to probe the death of Sushant besides the CBI and the ED.

(The above story first appeared on LatestLY on Sep 24, 2020 04:30 PM IST. For more news and updates on politics, world, sports, entertainment and lifestyle, log on to our website latestly.com).