Abhishek Bachchan made his web debut with Amazon Prime series, Breathe Into The Shadows. 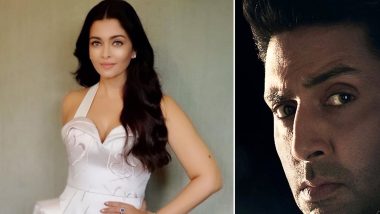 Abhishek Bachchan made his web debut with Amazon Prime series, Breathe Into The Shadows. The actor has been extensively promoting this series which also stars Amit Sadh, Nithya Menen in the lead. As Junior B marks his new journey on a new medium, his actress wife Aishwarya Rai Bachchan could not hold her excitement. The Bollywood beauty took to her Instagram to share a series of 'Breathe' posters and exclaimed 'Shine on baby' in her caption. Breathe Into the Shadows Starts Streaming Early - Here's How and Where You Can Watch Abhishek Bachchan's Web Debut.

The former Miss World is rarely active on social media. However, whenever she is, she grabs the headlines. Her posts are mostly about her family and friends. So, how could not she not promote and extend support to her talented husband? Here is the post shared by the Guru actress.

A post shared by AishwaryaRaiBachchan (@aishwaryaraibachchan_arb) on Jul 9, 2020 at 8:47am PDT

While Abhishek is all set to embark this new journey, Aishwarya is yet to make any official announcement on her next. However, there are reports that she is a part of Mani Ratnam's Ponniyin Selvan. It is said to be an adaptation of a popular Tamil novel of the same name and chronicles the rise of the Chola rulers. The first poster of the extravagant movie was released some time ago that had a picture of a sword on it. However, fans are eagerly waiting for Aishwarya's look and character to be revealed from the film. But before that, it is 'Breathe' time, so do let us know your thoughts on the same.

(The above story first appeared on LatestLY on Jul 09, 2020 10:26 PM IST. For more news and updates on politics, world, sports, entertainment and lifestyle, log on to our website latestly.com).