Dial 100 is a Bollywood thriller, written and directed by Rensil D'Silva. The movie stars Manoj Bajpayee, Neena Gupta and Sakshi Tanwar in the lead. Dial 100 is streaming exclusively on Zee5. 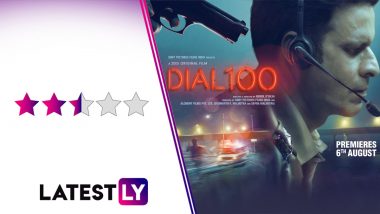 Dial 100 Movie Review: Dial 100 is a song-less thriller set over the events of a night, written and directed by Rensil D'Silva. Manoj Bajpayee, Neena Gupta and Sakshi Tanwar play the three main characters in the movie, that has seen an direct OTT release on Zee5. Anuj Rakesh Dhawan is the cinematographer and Asif Ali Shaikh is the editor, while Raju Singh has scored the background score for Dial 100. Dial 100: Director Rensil D’Silva Unveils the Chilling Story Behind Manoj Bajpayee, Neena Gupta’s Thriller.

Senior PI Nikhil Sood (Manoj Bajpayee) works at the Police Control Room in Mumbai, handling distress calls of the citizens dialling 100. One rainy night, he gets a call from a stranger that turns his life hellish. At first, Nikhil assumes the caller (Neena Gupta) to be suicidal, but she turns out to be more deranged than he thought. Before he realises it, the caller has taken his wife Prerna (Sakshi Tanwar) captive, and is planning to punish his teenage son for something that happened to her in the past.

Dial 100 starts off good. It does a decent setup of where Nikhil fits in his workplace and gets into the main storyline straightaway without any frills. The first telephonic conversation between Nikhil and the caller is captivating enough to set the mood of the film right, and the credit goes to the actors in how they handled the scene. The scene focuses on Bajpayee's expressions and his tone of speaking and the actor, who is a MAJOR reason to even check out the film, does an incredible job here. Neena Gupta leaves an impact even before we see her on screen in the way she plays around with Nikhil's confusion as to what she intends to do.

So far, nothing to panic. Except for Nikhil, of course, who is about to to fall into deep trouble.

However, once the caller is revealed in person and her intentions and her reasons to do so are made clear, Dial 100 sets into a sub-standard, predictable arena that does little to deliver on its A Wednesday-inspired narrative. With the cards already shown to us, we then have to wait for more than an hour to see the caller, whose name is Seema, to just deliver her final play which isn't much to say. Especially for someone who manages to get into the police control unit to keep a tab on Nikhil. OTT Releases Of The Week: Manoj Bajpayee’s Dial 100 on ZEE5, Suriya’s Navrasa on Netflix, James Gunn’s The Suicide Squad on HBO Max & More.

And just like her plan to mete out her brand of justice, the movie also struggles to make it interesting or thrilling enough, without letting us in on the inconsistencies. Like, how no guard is checking the security cam in the parking garage of a nightclub, where the climax is set. Or why Prerna doesn't really do much to save herself from the clutches of just one woman? Yes, her captor has a gun, but desperation can make you do insane stuff. Yet Prerna remains quite passive even when Seema is distracted enough to attack her dog.

Another issue I had with Prerna is that as a mother who is worried of what her son is upto and she keeps pestering her husband about it, she witholds a crucial piece of information about him. That feels so unlike her character, considering she is shown as someone not trustful of her son. That said, Sakshi Tanwar has put in a fine performance here, especially fantastic in the finale at the hospital.

These plotholes aside, even considering from a storytelling point of view, Dial 100 only manages to pass muster. The dialogues feel contrived and artificial, especially when it comes to being expository. Once her game is shown, Seema becomes less interesting as a character and Neena Gupta's performance also suffers as a result. The character of Atharva comes across as annoying, made even so by the performance of the actor who plays the role, and thus making Nikhil's efforts to save his son not exactly worth rooting for. The scene where he has a scuffle with her drug dealer friend only adds to the tedium.

I do want to believe that Dial 100, instead of switching focus between caller and the receiver like A Wednesday did, could have been much better if most of the focus stayed on Nikhil's character. It should have kept rest of the action offscreen, thus adding to the tense factor and the unpredictability. As someone who is being restricted at his own workplace without the option of seeking help of his colleagues, Nikhil's dilemma and his uncertainty made for the film's better portions. Of course, it is amplified by a class act from Manoj Bajpayee, whose controlled aggression is one major reason why Dial 100 could be a decent one-time watch. Sadly, Dial 100 also turns out to be just another film that couldn't keep up to what its lead star is bringing to the table as an actor.

Dial 100 comes across a film that depends way too much on Bajpayee's histrionics to pull it through, but doesn't offer him much support to make that happen. The film is streaming on Zee5.

(The above story first appeared on LatestLY on Aug 06, 2021 07:46 AM IST. For more news and updates on politics, world, sports, entertainment and lifestyle, log on to our website latestly.com).