While netizens praised Rihanna's tweet for extending her heartfelt support to the ongoing farmers' protest in India, on the other hand, they have questioned the Bollywood celebs for remaining quiet all this while. 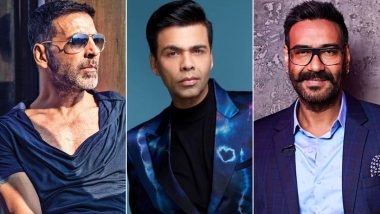 International pop singer Rihanna’s tweet in support of Indian farmers created a huge furore on the internet. Re-tweeting an article on India’s ongoing farmers’ protest, she mentioned, ‘Why aren’t we talking about this?! #FarmersProtest’. While many netizens and a few celebs lauded her stand for shedding light on the protest, there were many who even tried to oppose her. Netizens praised RiRi for extending her heartfelt support and at the same time questioned the Bollywood celebs for remaining quiet all this while. And then The Ministry of External Affairs stepped in and issued a statement on the international attention the farmers’ protest has since been getting. Farmer Protests: Akshay Kumar, Ajay Devgn, Suniel Shetty, Karan Johar, Ekta Kapoor Extend Support To Government's India Against Propaganda Drive, Urge For An Amicable Solution.

Soon after it popular Bollywood actors, directors and producers started to share coordinated tweets by using the hashtag ‘India Together’ and that left the citizens miffed. Akshay Kumar wrote, “Farmers constitute an extremely important part of our country. And the efforts being undertaken to resolve their issues are evident. Let’s support an amicable resolution, rather than paying attention to anyone creating differences. #IndiaTogether #IndiaAgainstPropaganda.” Ajay Devgn urged the people to be cautious and mentioned, “Don’t fall for any false propaganda against India or Indian policies. Its important to stand united at this hour w/o any infighting #IndiaTogether #IndiaAgainstPropaganda.” Karan Johar stated, “Let us not let anyone divide us. #IndiaTogether.” Suniel Shetty, Anurag Srivastava, Ekta Kapoor and many other eminent personalities from across fields shared such posts. Mia Khalifa Joins Rihanna, Greta Thunberg and Amanda Cerny to Extend Support to Farmers' Protest in India.

Seeing such co-ordinated tweets, netizens have slammed Bollywood celebs for not extending their support when it was needed. They have started mentioning #SpinelessCelebs, #ShameOnBollywood, #AntiNationalBollywood and are trending these hashtags on Twitter. Take a look at the tweets below:

Hollywood is showing deep Concern about #FarmersProtest in India.

All the farmers have been sitting on the road outside for 2 to 3 months… what they need… just listen to their words. And now the eyes of famous people are open and that too when some outside people have raised the issue....#SpinelessCelebs

The Co-Ordinated Tweets Have Been Called Out

What more could you expect from these Bollywood sell outs #clowns #shameonbollywood pic.twitter.com/1XlDyAnTaq

Besides Rihanna, Swedish environmental activist Greta Thunberg had also extended her support to the Indian farmers. She had written, ‘We stand in solidarity with the #FarmersProtest in India’.

(The above story first appeared on LatestLY on Feb 04, 2021 09:22 AM IST. For more news and updates on politics, world, sports, entertainment and lifestyle, log on to our website latestly.com).