Friendship Day 2019: Alia Bhatt Takes the BFF Test With Akansha Ranjan and It Is a Laugh Riot (Watch Video) 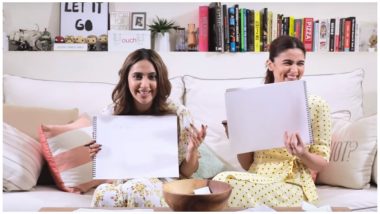 Alia Bhatt recently launched her YouTube channel, through which the actress is helping her fans get to know her better. In her latest video, on the occasion of Friendship Day, she took a friendship test with her BFF Akansha Ranjan. The two ladies are thick as thieves. We have all drooled over their vacation pics. Haven't we? In the video, they were tested about how well they know each other. They discussed everything, from funny embarrassing memories to their worst fears. It is quite a funny video as Alia and Akansha, both, crack up a few times. Prada Song: Alia Bhatt's Contribution In The Upcoming Music Video Is Not Just Limited To Dancing.

On being asked who is on Alia's speed dial, the answer is revealed to be Akansha and Ranbir Kapoor. Alia and Akansha also revealed how they were fined by the police, this one time, for peeking their head out of their car's sunroof, while driving down Worli Sea Link. Alia Bhatt is Like a Mischievous Child During a Family Dinner in Ooty and We Think It's Too Cute (Watch Video).

In one of her previous videos, Alia had given us a tiny tour of her lovely home. She had made a VLOG of her moving day. In another video, she had revealed her morning routine to her fans.

On the work front, Alia Bhatt will be next seen in Dharma Productions' superhero fantasy film, Brahmatsra. She stars with her beau Ranbir Kapoor in the movie. She is also shooting for Sadak 2, which will be her first film for her father's production house. She has also been roped to play the female lead in the Telugu film, currently known as RRR. She has also announced as one of the leads in Karan Johar's next directorial, Takht.

(The above story first appeared on LatestLY on Aug 04, 2019 06:24 PM IST. For more news and updates on politics, world, sports, entertainment and lifestyle, log on to our website latestly.com).