The Gangs of Wasseypur producer Sunil Bohra has bought the rights of Ushinor Majmudar’s novel, God of Sin: The Cult, Clout and Downfall of Asaram Bapu. The producer plans to turn it into a film. 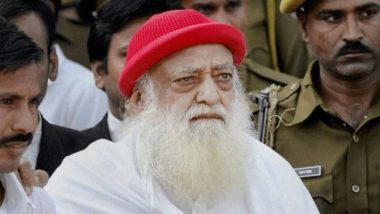 Bollywood has its fingers wrapped around biopics. From politicians, sportsmen, freedom fighters to acid attack survivor, Hindi Cinema has tried covering as many biopics as possible. Now, if the reports are to be any true, we are looking at yet another biopic, but this time it will be of a convicted rapist. Yes, reports suggest that a movie on the real life of Asaram Bapu is in the pipeline. The Gangs of Wasseypur producer Sunil Bohra has bought the rights of Ushinor Majmudar’s novel, God of Sin: The Cult, Clout and Downfall of Asaram Bapu. The producer plans to turn it into a film. Swara Bhasker’s Masturbation Scene From Veere Di Wedding Resurfaces on Polling Day As Trolls Target Her, Actress Hits Back Like a Boss.

The book describes the journey of the self-acclaimed God-Man and a spiritual leader. His rise and his downfall following the arrest in a sexual assault case in 2013 is talked about in the book. Sunil Bohra gave his statement to a leading daily and was quoted, “I read the book and was taken in by lawyer PC Solanki who fought the case for the victims against Asaram Bapu for free. The two lady police officers — one from Jodhpur and the other from Surat — are inspiring, too. In my eyes, they are the real heroes. We will focus on these people and the rest will be based on facts. I bought the rights of the book last month. I have started meeting writers and shall lock the team soon. I want the movie to have an international appeal. The cast will be decided once the script is ready.”

Sunil achieved fame for his production projects like Gangs Of Wasseypur, Shahid, Tanu Weds Manu, and The Accidental Prime Minister. Talking about Asaram Bapu, his son is also convicted by a Surat court in a rape case. A controversial film, such as this one, is likely to garner huge attention and we wonder what the film will have in store for us.

(The above story first appeared on LatestLY on Apr 30, 2019 12:49 PM IST. For more news and updates on politics, world, sports, entertainment and lifestyle, log on to our website latestly.com).