Genelia D'Souza who is now called as Genelia Deshmukh, has turned a year older today. Tagged as the bubbly girl by the media, let's a take a look at some of the lesser known facts about this gorgeous momma of two cute munchkins. 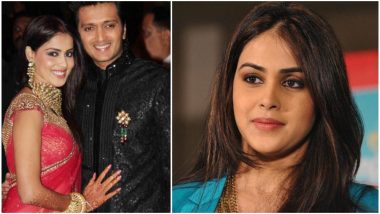 When we speak of Genelia Deshmukh, who was formerly known as Genelia D’Souza (her maiden name), the first thing that anybody could imagine is her cheerful face. Be it onscreen or off screen, she is one of the most vivacious actress of Bollywood. Genelia, who is tagged as the ‘bubbly girl’ by the media, has turned a year older today! Her fans all around the world have been showering with some lovely wishes for their favourite actress on social media. It was in 2012 when we saw her last doing a full-fledged role in the film Tere Naal Love Ho Gaya, playing the lead actress alongside Riteish Deshmukh. The film released on 23 February, and it’s the same month that they tied the knot. On Genelia’s 32nd birthday, let’s take a look at some of the facts that might just leave you surprised about the Riteish’s wife. Was Genelia Deshmukh Surprised or Shocked Seeing Hubby Riteish’s ‘Red Squirrel Tail’? Find Out Here.

Genelia is the daughter of Jeanette D'Souza and Neil D'Souza. Born on August 5, 1987, she is a Marathi speaking Christian from North Konkan. For those who don’t know, her name is a combination of her parents’ name and she is fondly called as Geenu.

Genelia did her schooling from Apostolic Carmel High School in Bandra, Mumbai. She completed her degree in Management Studies from d St. Andrew’s College, which was also in Bandra. Besides being a fantastic actress, Genelia was also a state level athlete, sprinter and a national level football player.

Genelia is quite religious; she never missed a Sunday mass at the at St. Anne’s Parish in Bandra. In an interview to DNA she was quoted saying, “My communication with God is conversational, [...] I'm God's favourite child; I believe that God has always been kind to me.” Besides attending masses and offering novena’s at St. Michael’s Church in Mahim, Genelia was also regular when it comes to family rosary.

How Genelia Shot To Fame

The gorgeous Genelia was a bridesmaid at one of her friend’s wedding and that’s how she was spotted by a director who approached her for a commercial, an ad with Big B. Yes, Genelia first shared screen space with Amitabh Bachchan for Parker Pen ad that shot her to fame. She was just 15 when she bagged this commercial.

Genelia D’Souza wasn’t keen in pursuing a career in acting and hence she turned down the offer for the role in the film Tujhe Meri Kasam. Tamil filmmaker S Shankar who was impressed watching her performance in the Parker Pen commercial, approached her to play the leading lady in his film, Boys that released in 2003. She signed two other films simultaneously – Tujhe Meri Kasam (Hindi) and Satyam (Telugu). Genelia did many other Hindi and South Indian films after it.

The Love Tale with Riteish Deshmukh

Genelia and Riteish Deshmukh met on the sets of their debut film, Tujhe Meri Kasam. They dated for almost a decade before getting hitched. Though there were little trouble with the actor’s father accepting their relationship, the couple later tied the knot in 2012. The ceremony took place in both Hindu and Christian traditions.

Genelia Deshmukh and her hubby Riteish Deshmukh who got married on February 3, 2012, are blessed with two sons, Riaan and Rahyl. Riaan was born on November 25, 2014 and Rahyl was born on June 1, 2016.

Genelia Deshmukh has won hearts with her performances. Though she did cameo appearance in few films in recent years, fans would be happy to see back as a leading actress. On this special day, we wish her tons of love success and love. Happy Birthday, Genelia!

(The above story first appeared on LatestLY on Aug 05, 2019 08:44 AM IST. For more news and updates on politics, world, sports, entertainment and lifestyle, log on to our website latestly.com).