Girish Karnad Birth Anniversary Special: 5 Interesting Facts About The Actor You Know But The Man You Don't

Girish Karnad breathed his last on June 10, 2019, in Bengaluru. On his birth anniversary today, let us tell you five interesting facts about the Malgudi Days actor. 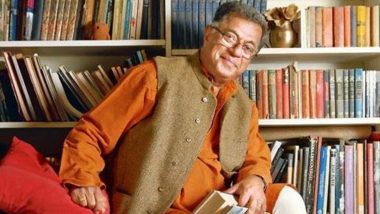 The millennials might remember him as RAW Chief Dr Shenoy from Ek Tha Tiger and its sequel who is out to nab Tiger and Zoya. But the late Girish Karnad was so much more than just a single role that didn't even do full justice to his craft. In fact, acting was never part of his plan as he wanted to be a poet. Acting happened by accident and we are so glad about that. His presence in Malgudi Days is a favourite of many. But if you ask us, the way he used to explain complex scientific phenomena on Turning Point on Doordarshan made us a bigger fan of his. Raghu Karnad Shares Late Father Girish Karnad’s Portrait With an Emotional Instagram Post

Girish Karnad is a great actor (despite being unscrupulous in Iqbal, we loved him) but the journey of his life is even more interesting than the movie characters he played. His mother was a nurse and a cook. She was the housekeeper for the wife of Dr. Raghunath Karnad and eventually married him. She already had a son from her first marriage. His father too was a crusader against superstitious beliefs or any kind of social stigma. Hence marrying a widow created a stir.

Girish Karnad had revealed during an interview that his mother didn't want to give birth to him as she didn't want more children. "When my mother was expecting me, she decided she did not want to have any more children...So, she persuaded my father to take her to a doctor for an abortion. But, I will forever be grateful to that doctor, because that day she did not come to her clinic. My mother waited half a day, got bored and returned," he had recalled.

Karnad was a Rhodes scholar and when he was in Oxford, he had this dream of being a poet much like T S Elliot. But when he sat down to pen something, he came up with a Kannada play called Yayati. It became so popular that Karnad changed his mind and moved to India.

Girish Karnad debuted in movies with a Kannada movie called Samskara and his breakthrough Hindi film was Nishant. But in both cases, he had requested the director to get someone else. He told India Today, "I'm not interested in being an actor. In both, Samskara and Nishant, I was reluctant to play the role, and asked the directors to look out for someone else."

Girish Karnad apparently was 16 when he first found out that his eldest sibling was his half-brother.

Girish Karnad used to sketch famous people and got them autographed by them. He had autographed sketches of people like TS Eliot, Sarvapalli Radhakrishnan and Albert Einstein to name a few. But once when he sent Irish dramatist Sean O'Casey his sketch, he received a letter asking him to not waste his time on this and do something that will make him sign autographs instead.

Girish Karnad breathed his last on June 10, 2019, in Bengaluru. He will be forever missed.

(The above story first appeared on LatestLY on May 19, 2020 08:10 AM IST. For more news and updates on politics, world, sports, entertainment and lifestyle, log on to our website latestly.com).