Haathi Mere Saathi starring Rana Daggubati as the Forest Man Of India has the heart in the right place but is mired by a terrible execution and dated narrative. The movie is streaming on Eros Now and air on Zee Cinema. 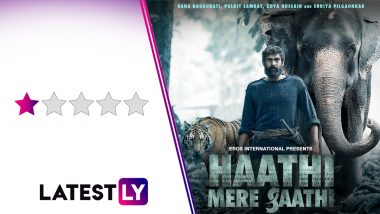 Haathi Mere Saathi review: A corrupt politician, cops rallying behind him and even becoming their henchman, a preachy invincible hero, villagers in the crowd, a reformed supporting actor, and some heinous acts...all these subplots take us back to the 90s when such template existence was what commercial Bollywood movies was all about. Rana Daggubati's Haath Mere Saathi takes the same route. It's a time travel journey we didn't sign up for. Kaadan Review: Rana Daggubati’s Performance Gets Unanimously Hailed While The Film Disappoints Critics

Vandev (Rana Daggubati) is the forest man of India who has been honoured by the President for his uplifting work for forests. He lives in the forest and among its inhabitants. His grandfather had donated their lands to the Government for upkeep and conservation. Vandev has a connection with every animal in the forest, especially a herd of elephants that his grandfather was quite fond of. So when a minister (Ananta Mahadevan) decides to build a township at the cost of erasing a forest reserve, Vandev is ready to fight tooth and nail to protect the animals and the forest.

An fleeting ode to the real forest man of India, Jaydev Payeng, Rana's Vandev mostly takes a fictional route. Every now and then, the audience is reminded he had planted several trees to enrich the forest just like Payeng. The similarities end there. The movie opens with some breathtaking shots of the forest from top, the canopy of trees, the beautiful animals, rich green trees and animal sounds. They make your small screen light up instantly. Haathi Mere Saathi is a well-meaning film. Destroying forests in the name of development is an important topic and the threat to the sensitive zones like forests are imminent. In today's time when the climate change is not a figment of imagination, HMS makes a point.

But it's the way the point is made which robs it off its glory. The execution is extremely dated and annoyingly shabby. We have watched enough movies on corrupt politicians going to any lengths for their gains, they just don't evoke the same response. Haath Mere Saathi, the 1971 film starring Rajesh Khanna and Tanuja was a classic. The biggest highlight of the movie was the protagonist's equation with the elephants. Here, despite that being one of the important premises, it's hardly developed. Vandev keeps admiring their wit and smartness while the animals make appearances here and there. There are no moments between them worth talking about, which is perhaps the biggest failure of this movie. PSPK Rana Movie: Pawan Kalyan and Rana Daggubati’s Untitled Film To Release in Theatres on January 12, 2022!

What's even more disappointing is the way the director takes the audience for granted. Just to suit a twist in the tale, random scenes are included. The herd of elephants mistake Vandev for hurting one of their own and that comes across as an afterthought. It's laughable. None of the characters have any depth. The hammy one man against everyone else gets boring as the film proceeds to the point that you stop caring about what happens to the elephants. Unnecessary romantic angle, equally unnecessary songs and some terrible performances mire he experience further.

Check out the trailer of Haathi Mere Saathi here

Haathi Mere Saathi has some terrible performances by nearly every member of the cast. Rana does get the look right and performs well in certain scene but in totality, he fails to leave an impact. Pulkit Samrat's Shankar is so shabbily written and acted that you don't want to waste any time on the character and so is Zoya Hussain. Shriya Pilgoankar is more of a crowd than an important character while Anant Mahadevan is pretty basic.

-breathtaking visuals of the forest at the star

Haath Mere Saathi could have played a crucial role in imparting the message of forest conservation and it's importance but ends up being a hammy affair with cliched plots. Haathi Mere Saathi is streaming on Eros Now and air on Zee Cinema.

(The above story first appeared on LatestLY on Sep 18, 2021 12:00 AM IST. For more news and updates on politics, world, sports, entertainment and lifestyle, log on to our website latestly.com).