In The World Of Jaani Dushman Haters, I Am The One Who Has Watched It More Than 20 Times

You might find me watching Jaani Dushman: Ek Anokhi Kahani on TV till date. I don't know if I am the only one in the whole world to do that or if there are others like me. If there are, please join the club. 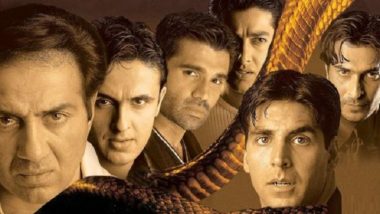 If you came here thinking that this is yet another sarcastic piece on Jaani Dushman: Ek Anokhi Kahani, well, sorry to disappoint you, it's not. As the title reads, I really do like, if not love this movie. Of course, it's nowhere close to a cinematic gem. I got that reality check when I saw it for the first time when I was 14-years-old. However, I am here to admit that every time it played on Zee Cinema, I would watch it till the end at the cost of being judged by my sister and yelled at by my mother. My sister thinks that I have watched Jaani Dushman: Ek Anokhi Kahani at least 20 times. If you are reading this sis, here's a confession - it's definitely more than that.

A few parts of the movie did give me an adrenaline rush back then. For example, this action gravity-defying and illogical action sequence between Akshay Kumar and Armaan Kohli:

For a very brief period of time, I resonated with Kapil (Armaan Kohli) because he was immortal in this very scene. It helped me stand up to the bullies in my school. You might think I am making all this up, but I am really not. Truth be told, I was a very quiet kid. So getting into fist-fights was nowhere in my agenda. However, this one and only time, I got involved in a nasty fight with a classmate. All I could think was that I am Kapil and no one can destroy me. Honestly, it worked. The witnesses were surprised to see how many punches I threw at the guy. Again, this is not imaginary at all.

While there are many memes and one infamous pretentious movie review out there making fun of Jaani Dushman, I just want to give the credit where it's due. Director Rajkumar Kohli (father of Armaan Kohli) brought together 11 actors in this film. Akshay Kumar, Sunny Deol, Suniel Shetty, Manisha Koirala, Arshad Warsi, Rambha, Aftab Shivdasani (that's seven of them) were established actors. You see not many at that time were able to achieve this feat, and this was another reason why I kept watching this film. I dig on multi-starrers even now. Quarantine & Chill! 17 WTF Movies of Salman Khan, Shah Rukh Khan, Akshay Kumar, Deepika Padukone and Other Fave Bollywood Stars to Watch at Home for Pure Guilty Pleasures!

Also, while I was growing up, I was not watching many Hollywood movies. So, I missed out on some classic action films like The Terminator, The Matrix, Speed and so on. It was only at the age of 20 that I started taking a keen interest in the movies from the West. Obviously, I found the action scenes in Jaani Dushman very cool. I am pretty sure the people who don't like Jaani Dushman is simply because they have seen way better VFX and high-octane action sequences on the screen.

Having said all of that, as I grew up, I also realised the treatment of sexual assault in this film is highly problematic. Especially the part where Manisha Koirala's group of friends in college that includes almost the entire star cast tell her to forgive her molesters (smh).

You might find me watching Jaani Dushman on TV till date. I don't know if I am the only one in the whole world to do that or if there are others like me. If there are, please join the club and let's make everyone associated with this film proud.

(The above story first appeared on LatestLY on Apr 02, 2020 10:28 AM IST. For more news and updates on politics, world, sports, entertainment and lifestyle, log on to our website latestly.com).