Some employees of Phantom, a company that dissolved in 2018, and its other promoters director-producer Vikramaditya Motwane, producer Vikas Bahl and producer-distributor Madhu Mantena were also searched in the same case. 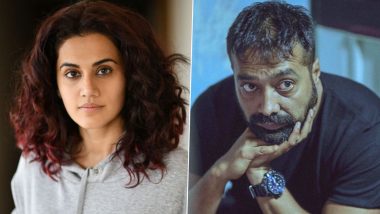 Taapsee Pannu and Anurag Kashyap have been headlining the news ever since the story of the IT raids at their properties broke out. The two are accused of tax evasion along with Phantom's Vikas Bahl and were questioned about the same in Pune. After three days of the news surfacing online, the Income Tax department has finally issued an official statement in the probe. The officials have shared details of income discrepancies amounting to Rs. 650 crore in ongoing raids on Kashyap, Pannu and others. Anurag Kashyap and Taapsee Pannu’s Properties Being Investigated by Income Tax Department; IT Raids Underway.

Excerpts of the statement read that the Income Tax Department on Wednesday began hunts at Taapsee, Anurag and his partners' homes and offices who launched the now-defunct production house Phantom Films. The searches were a part of a tax evasion probe against Phantom Films and was carried out across 28 locations in Mumbai and Pune. It also covered Reliance Entertainment group CEO Shibhasish Sarkar and some officials of celebrity and talent management companies KWAN and Exceed.

The statement further revealed how WhatsApp chat records, emails, documents and computer documents were seized from various locations. Pannu and Kashyap, who were shooting in Pune, have been questioned by the tax officers. Some employees of Phantom, a company that dissolved in 2018, and its other promoters director-producer Vikramaditya Motwane, producer Vikas Bahl and producer-distributor Madhu Mantena were also searched in the same case.

"During the search, evidence of huge suppression of income by the leading film production house compared to the actual box office collections has been unearthed. The company officials have not been able to explain a discrepancy of around ₹ 300 crores. Evidence related to manipulation and under-valuation of share transactions of the production house amongst the film directors and shareholders, having tax implication of about ₹ 350 crores has been found and is being further investigated," revealed the Income Tax Department.

The statement further read, "Evidence of cash receipts by the leading actress amounting to ₹ 5 crore has been recovered. Further investigation is going on. Apart from this, non-genuine/bogus expenditure to related concerns by the leading producers/director having tax implication of about ₹ 20 crore has been detected. Similar findings have been made in the case of the leading actress also." Taapsee Pannu Shares a Post Calling Anurag Kashyap 'Biggest Feminist' After the Director Gets Accused Of Sexual Harassment.

Taapsee Pannu and Anurag Kashyap have not yet addressed the issue with the media. Meanwhile Swara Bhasker recently tweeted in their support and send them support via sweet messages. Anubhav Sinha also sent support to the Manmarziyaan duo.

(The above story first appeared on LatestLY on Mar 05, 2021 09:57 AM IST. For more news and updates on politics, world, sports, entertainment and lifestyle, log on to our website latestly.com).