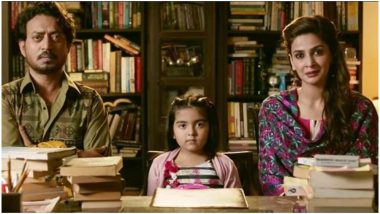 We earlier informed you about Irrfan Khan's return from the UK. The actor who was in the country receiving treatment for his neuroendocrine tumour is set to mark his return in Bollywood with a sequel to Hindi Medium. Yes, as per a report in BollywoodLife.com, the actor has given his nod to this sequel and he's expected to return to India either before Diwali or after it. The sequel, in fact, has also got a new name and is now titled English Medium. Sara Ali Khan Drops Out of Nitin Kakkar’s Father-Daughter Film With Saif for Hindi Medium Sequel?

As per a report in Bollywood Hungama, the sequel is all set to go on floors next month. The source close to them said, “Well, everyone by now knows that Irrfan will be back in the city next month. Once he recoups completely, he will start with Hindi Medium sequel which is now titled English Medium. Producer Dinesh Vijan is currently in the process of locking the director and the same will be finalized soon. T-Series will be backing the film this time around too.” Irrfan Khan Is All Set to Resume His Work in Bollywood; Will Soon Start Shooting for Hindi Medium Sequel.

Hindi Medium enjoyed a successful run at the Indian box office and it even earned enough money at the China box-office. The success of the movie was responsible for provoking the makers to come up with its sequel. While there were many other projects offered to the Karwaan actor, he decided to go ahead with English Medium and the rest will be announced once he returns to India.  The sequel will revolve around Irrfan and Saba Qamar's daughter, Pihu, who's now a college student. There are reports that Sara Ali Khan may play his daughter's role in the film. Will Saba Qamar star in this sequel? We don't know and the chances of her coming on board are very bleak.

(The above story first appeared on LatestLY on Oct 28, 2018 11:13 AM IST. For more news and updates on politics, world, sports, entertainment and lifestyle, log on to our website latestly.com).