The shooting of the film Jug Jugg Jeeyo came to a halt after film’s director Raj Mehta and lead actors Neetu Kapoor and Varun Dhawan were tested positive for COVID-19. 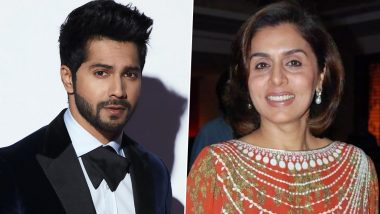 Jug Jug Jeeyo is the upcoming film starring Anil Kapoor, Neetu Kapoor, Varun Dhawan and Kiara Advani in the lead. The shooting of the film came to a halt after film’s director Raj Mehta and lead actors Neetu and Varun were tested positive for COVID-19. The latest buzz is that Neetu and Varun have tested negative for the novel coronavirus and are expected to resume shoot soon. Jug Jugg Jeeyo: After Varun Dhawan, Neetu Kapoor, Co-Star Maniesh Paul Also Tests Positive for COVID-19.

It was earlier reported that the makers had decided to roll out the shoot with the actors Anil Kapoor and Kiara Advani and the crew members who were tested negative for COVID-19. Talking about Varun Dhawan and Neetu Kapoor joining the team, a source revealed to Mid-Day, “While we resume filming today, Varun will join us on December 17. In the past fortnight, his symptoms have subsided and his antigen tests have been negative. He will take a final test today before reporting to the set tomorrow. The same holds true for Neetu ma’am.” Jug Jugg Jeeyo: Anil Kapoor Back in Town As Crew Members Test COVID-19 Positive, Neetu Kapoor to Fly Back to Mumbai via Air Ambulance?

Considering Varun Dhawan’s health condition at present, the source elaborating about the actor’s shooting schedule was quoted as saying, “Unlike earlier when he was shooting daily, Varun will film every two days in shorter shifts, and will continue working till the month-end.” Despite following safety guidelines there have been several actors who have been infected with coronavirus on the sets of the film. The release date of Jug Jug Jeeyo, produced under the banner of Dharma Productions, is yet to be announced.

(The above story first appeared on LatestLY on Dec 16, 2020 09:00 AM IST. For more news and updates on politics, world, sports, entertainment and lifestyle, log on to our website latestly.com).