Kabhi Eid Kabhi Diwali: Salman Khan to Pair Up With Pooja Hegde for the First Time for This Eid 2021 Release

After working with producer Sajid Nadiadwala for Housefull 4 which released last year, Pooja will now work with him again for Kabhi Eid Kabhi Diwali. 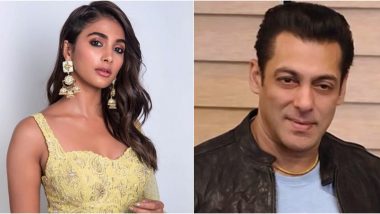 We had earlier reported that Salman Khan is all set to team up with makers Farhad-Samji for a family drama titled Kabhi Eid Kabhi Diwali and now we hear, a leading lady has finally been locked for the same. After foraying into Bollywood with Mohenjo Daro along with Hrithik Roshan, Hegde has been shuttling well between big South projects as well as Bollywood. After working with producer Sajid Nadiadwala for Housefull 4 which released last year, Pooja will now work with him again for Kabhi Eid Kabhi Diwali. This is the first time she will be pairing up with Salman and we bet this new pairing is certain to get the audiences excited. Kabhi Eid Kabhi Diwali! That's Salman Khan's Eid 2021 Release Directed By Farhad Samji, See Tweet.

Hegde will play Salman's love interest in the film and producer Sajid Nadiadwala informed Mumbai Mirror saying she's perfect for this role. As reported by Mirror, the makers have planned several workshops in the lead up to the first schedule which will kick off in October. Not just this, we hear Salman and Pooja's track will have a lot of humorous moments.

We hear Pooja will be essaying the role of a small-town girl in the film. Considering she has pulled off such roles before in the South, it seems she felt like a perfect choice for makers. Her character is expected to be stark opposite to that of Salman Khan. Salman Khan To Collaborate With Aanand L Rai For Another 'Judwaa' Like Movie?

We have to say, Pooja's career in Bollywood is soaring high. After starring in hit film like Housefull 4 which was headlined by Akshay Kumar, the actress has now bagged the biggest film of her career with Salman Khan. The film is expected to hit the screens in Eid 2021.

(The above story first appeared on LatestLY on Feb 11, 2020 08:30 AM IST. For more news and updates on politics, world, sports, entertainment and lifestyle, log on to our website latestly.com).