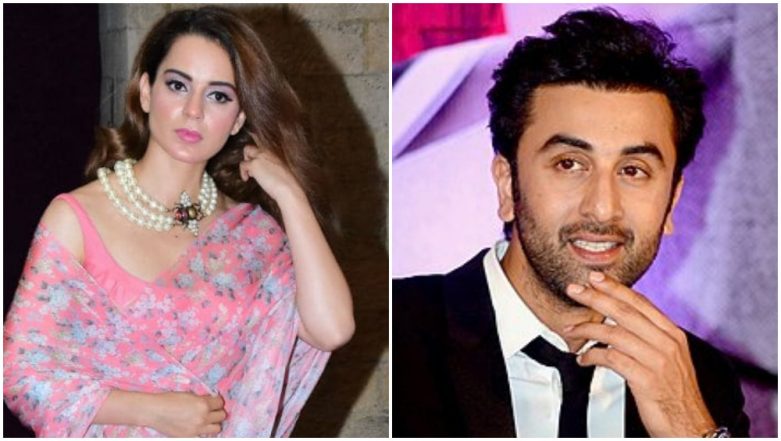 Kangana Ranaut sure doesn't believe in mincing her words. The actress has previously targeted Hrithik Roshan, Shahid Kapoor, Karan Johar, Deepika Padukone and Alia Bhatt with her sharper than knife words and Ranbir Kapoor is only the latest name to find a place in her list. The actress in her recent media interaction slammed the Brahmastra actor for his decision to stay away from politics. She believes he wants to be in everyone's good books and that's not the way it works. Kangana Ranaut and Ankita Lokhande Look As Regal As Ever at Manikarnika: The Queen of Jhansi Success Bash -View Pics.

"So this has to change and ap logo ko change karna chahiye ye. In logon ko sunana chahie. How can you listen to this ke I can't talk about politics, mujhe mere hal pe chhod dijiye. Mujhe toh sab se bana ke chalna hai. You should not. You should tell people what you think in the democracy. Aap bataiye pichhle 5 sal kaisa kam hua. Us hisab se you choose your leader. You should talk about it," she said while Ankita was silently hearing her rant and awkwardly smiling at her reaction.

You can hear Kangana Ranaut's reaction right below

Kangana Ranaut believes Bollywood has sidelined her for they believe she always speaks her mind. From calling Alia a Karan Johar's puppet to questioning Aamir Khan for not reciprocating her movie screening invites, the Manikarnika actress has slammed anyone and everyone from the industry. While we expect RK Jr to react to her statements, we know he'd prefer staying away from it.