Kartik Aaryan's Lookalike Spotted Again, This Time In Bandra; We Wonder What The Actor Is upto!

The statue left many wondering why it has been installed. While many speculate that the statue has been erected to promote a film or a brand, Kartik did not speak about any such thing. 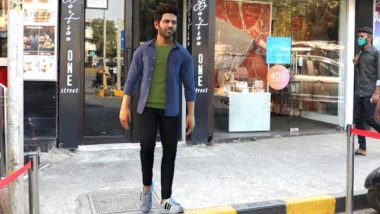 Kartik Aaryan has been making the most of this lockdown. From taking a poll about his beard to hosting his very own talk show, the actor made sure that he entertains his fans in one way or another. The actor has not been stepping out much, given that the pandemic has been affecting everyone around us and keeping safe at home. But while the actor is chilling at home, we did spot his lookalike on the streets of Mumbai. Kartik Aaryan Trolled For Using a Basic Caption, Ananya Panday Not Spared Either.

This lookalike that we are talking about is a wax statue of Kartik Aaryan that has been installed in front of a famous restaurant that Bollywood celebrities often visit. The wax statue is seen wearing a pair of black jeans, a green t-shirt and a blue jacket. Sharing the picture on his social media, Kartik Aaryan he will never step out without wearing a mask and that it is just a statue of his in Bandra. Kartik added the hashtag #DekhNahiRaha and we think he is definitely up to something.

The statue left many wondering why it has been installed. While many speculate that the statue has been erected to promote a film or a brand, Kartik did not speak about any such thing. Fans were elated to see the statue regardless and dropped heart and fire emojis in the comment section of the post. Earlier, the same statue was spotted outside the actor's house and was seen waving the paps. Kartik Aaryan's 'Nibba-Nibbi' Tweet While Promoting Love Aaj Kal With Arushi Sharma Gets Him in Trouble, Twitterati Calls Him Racist.

According to sources at Filmfare,  Kartik Aaryan has signed his first superhero movie with Vasan Bala. The film will be an adaptation of the comic book character Phantom. Apart from this, he recently announced his next project titled Dhamaka by Ram Madhvani. He also has Bhool Bhulaiyaa 2 and Dostana 2 in his kitty. He will star alongside Janhvi Kapoor and television actor Lakshya in Dostana 2.

(The above story first appeared on LatestLY on Dec 19, 2020 06:05 PM IST. For more news and updates on politics, world, sports, entertainment and lifestyle, log on to our website latestly.com).