Katrina Kaif Is All Praises for Rumoured Boyfriend Vicky Kaushal's Bhoot: The Haunted Ship, Calls It a 'Must-Watch'

While we are still waiting for the reviews of Vicky and Bhumi Pednekar's latest film, Kat has already given it a thumbs up with her review for it 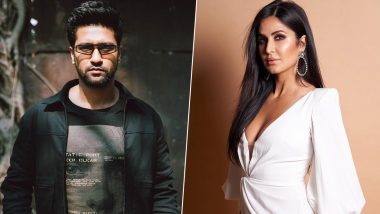 Vicky Kaushal's Bhoot: The Haunted Ship is all set to hit the screens on February 21 and we bet fans of the star are excited to see him in the horror genre for the first time. A special screening of the film was held on Wednesday, February 20 and in attendance was also Vicky Kaushal's rumoured girlfriend, Katrina Kaif. The duo have been spotted together at various occasions now and have even arrived at several parties together. For the film's screening, Katrina was accompanied by her sister Isabelle Kaif. While we are still waiting for the reviews of Vicky and Bhumi Pednekar's latest film, Kat has already given it a thumbs up with her review for it.  Bhoot: The Haunted Ship Trailer – Vicky Kaushal’s Horror Flick Does Not Promise To Be A Spook Fest (Watch Video).

Katrina took to Instagram to share a post after watching the Vicky Kaushal starrer and was all praises for it. The actress put up a story calling the film a 'Must-Watch' and also lauded the film's team including Vicky and others and called it 'Outstanding'. Well, we have to say with this post, rumours about Katrina and Vicky are definitely set to get stronger. In case they are seeing eachother, we have to say it's amazing how supportive a girlfriend Katrina is! Bhoot: The Haunted Ship Star Vicky Kaushal Says He Is Jealous of People Who Don’t Fear Watching Horror Movies Alone. Recently, Vicky responded to all the rumours about him dating Katrina. While he refused to confirm anything, the actor said he wants to guard his personal life to avoid discussions, interpretations and misinterpretations. Meanwhile, there have also been reports about the duo being considered for an intense romantic drama to be produced by Ronnie Screwvala.

Well, at least going by Katrina's review of Bhoot: The Haunted Ship, it looks like it is going to be an interesting watch. The film has been helmed by Bhanu Pratap Singh and is all set to hit the screens on February 21 along with Ayushmann Khurrana's Shubh Mangal Zyada Saavdhan.

(The above story first appeared on LatestLY on Feb 20, 2020 07:10 PM IST. For more news and updates on politics, world, sports, entertainment and lifestyle, log on to our website latestly.com).