On the work front, Katrina and Vicky have a busy year ahead. The actress has the horror-comedy Phone Bhoot, besides the Akshay Kumar-starrer cop action-drama Sooryavanshi, lined up for release. Vicky will be seen in Sardar Udham and a biopic of Field Marshal Sam Manekshaw titled Sam Bahadur. 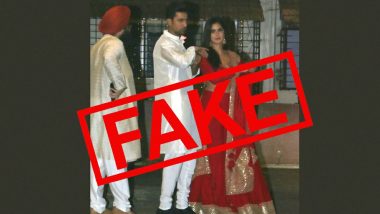 Vicky Kaushal and Katrina Kaif's relationship becomes a topic of discussion every now and then. After Harsh Varrdhan Kapoor's explosive confession, confirming that the two are dating, more and more rumours started surfacing online. Recently, a picture of the two surfaced online suggesting that the two got engaged in a secret ceremony. In the viral post, Katrina can be seen wearing a red lehenga while Kaushal is seen donning a white kurta look. Vicky Kaushal and Katrina Kaif To Go Public With Their Relationship on Koffee With Karan’s Upcoming Season – Reports.

Photographer, Viral Bhayani also shared the news on Instagram, making fans go crazy about the news. Sharing the alleged news, the caption read, "Hmmmm there are engagement rumours that they had a roka ceremony. Will wait for an official announcement till then it remains a rumour. #vickykaushal #katrinakaif." Many fans dropped comments on his post saying that they are happy for the couple.

Earlier, on the actress' birthday, Salman Khan’s stylist, Ashley Rebello had also shared an adorable wish for her. She was seen in a bridal avatar and it was Ashley's caption that added fuel to the fire.  It read, "may this be a reality soon", compelling people to think that the actress is indeed tying the knot with Kaushal.

While we are aware of the fact that it often happens to be the case where celebrities get hitched in an intimate ceremony and only tell their fans later, we had to check if this news about Vicky Kaushal and Katrina Kaif's roka was true or not. We did some digging only to find out that the picture that is going viral as their engagement pic is from a Diwali bash they attended together in 2019.

Here Is The Fact Check:

From what we have found out, Katrina had worn the red lehenga to a friend's Diwali party. It was the first time she was seen with Vicky, who was dressed in white traditional wear, and was also attending the mutual friend's party. This outing of their's sparked off dating rumours for the first time. The two have since maintained that the two are very much single and are not dating each other, but we often get to see hints of their romance online. While the relationship might be true, the engagement rumours are absolutely fake.

Check Out A Video Of The Duo From The Diwali Party:

In an interview with a leading tabloid, earlier Vicky Kaushal had said that he is not comfortable opening up about his personal life. “There are no cons to dating. It's a beautiful feeling. I understand that the paps are doing their job. I also understand that people have an interest in our personal lives, by the virtue of us being public figures. That’s fair. But it's completely up to me if I wish to share. I am not comfortable opening up my personal life for discussion. It’s important to me that I guard the good things,” he had told Mid-Day. Vicky Kaushal And Katrina Kaif's Dating Confirmation Leads To Twitterati Sharing Funny Memes and Jokes On Salman Khan And Ranbir Kapoor.

On the work front, Katrina and Vicky have a busy year ahead. The actress has the horror-comedy Phone Bhoot co-starring Ishaan Khatter and Siddhant Chaturvedi, besides the Akshay Kumar-starrer cop action-drama Sooryavanshi, lined up for release. Vicky will be seen in Sardar Udham and a biopic of Field Marshal Sam Manekshaw titled Sam Bahadur. He has an untitled comedy, too, opposite Manushi Chhillar.

It\'s a false rumour. The pictures are from a Diwali party they attended together in 2019.

(The above story first appeared on LatestLY on Aug 18, 2021 09:00 PM IST. For more news and updates on politics, world, sports, entertainment and lifestyle, log on to our website latestly.com).