Both Titanic and Kedarnath are set against the backdrop of real-life tragedies, that resulted in the deaths of many lives. 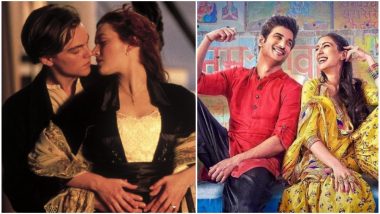 The trailer gave us a hint of it. And after seeing the film, we can't help but draw parallels with it. Kedarnath, directed by Abhishek Kapoor, has in its first promo hinted at some sort of semblance with one of the highest grossing movies of all time - James Cameron's Titanic. The 1997 blockbuster is considered as one of the most watched tragic love stories, and is set against the backdrop of the real-life sinking of the ship Titanic. The movie is now known for making its lead stars Leonardo DiCaprio and Kate Winslet household names. Kedarnath Movie Review: The Real-Life Tragedy Takes a Backseat In Sushant Singh Rajput-Sara Ali Khan's 'Titanic'- Inspired Love Story.

Titanic was a big hit in India and I am sure that many of our countrymen and women might have already seen the film by now. So that makes me curious as to why Abhishek Kapoor and co-writer Kanika Dhillon chose Titanic as an obvious inspiration for the Sushant Singh Rajput and Sara Ali Khan starrer. We can draw many parallels with both the movies, out which I have pointed out eight similarities below for your info. Needless to say, there are MAJOR SPOILERS AHEAD! Kedarnath Movie Row: Uttarakhand Government Sets Up Panel to Examine Objections About Sushant Singh Rajput, Sara Ali Khan Starrer.

A Fictional Love Story That Leads To A Real-Life Tragedy

Both Titanic and Kedarnath are set against the backdrop of real-life tragedies, that resulted in the deaths of many lives. And yet instead of following the lives of the real victims, both the movies use a fictional love story whose culminations coincide with the tragedies.

Though this trope is seen in many movies, the conflict in the love story of the couple belonging to different classes and religions continue with Kedarnath. While religion is what divides the couple in Kedarnath, it is the class that divides Jack and Rose in Titanic.

Like Rose, even Mukku (Sara Ali Khan) is engaged to an arrogant a-hole who looks down upon Mansoor (Sushant Singh Rajput) because he belongs to a different religion. Interestingly, Mukku's fiance was earlier engaged to her elder sister before he himself chose to get betrothed to the prettier sibling. Which makes us wonder about the curious case of...

Rose's mom had agreed for the alliance to Cal Hockley only because he could save them from a financial crisis. However, in Kedarnath, we are not exactly sure why Mukku's father (Nitish Bharadwaj) is so indebted to his future son-in-law that he overlooks the fact that the guy treats his both his daughters like commodities.

Here's Our Video Review of Kedarnath -

Getting Inmate in Dark Places

The scene in Titanic, when Jack and Rose have sex in a car placed in the cargo area, is considered as one of the most beautiful scenes in cinema. In Kedarnath, the couple gets intimate in a dark cave though their intimacy is restricted to a passionate kiss.

Remember this above scene where Jack takes Rose to the third class cabin, where they mingle and dance freely. In Kedarnath, the above scene comes in the form of the Sweetheart song, where Mansoor takes Mukku to a Muslim wedding.

The scene where Jack put Rose on a floating wooden door after the ship goes down is the most discussed moment these days. There are people who opine that there was enough room for two on the wood, while others say that it wouldn't have held the weight of two.

In Kedarnath, the idea is borrowed with a more logical and nil debatable way. After the main temple, where the lead couple and her father take refuge, gets ravaged by the floods, a helicopter comes to rescue the survivors, which are the trio along with a family of four. Mansoor helps in getting Mukku, her father and most of the other family members on the helicopter, with only the man in the other family and Mansoor remaining on the ground. It's here when the helicopter gets overloaded and the pilot gestures that they have space for only one. A good-hearted Mansoor lets the other man climb the rope, as a shocked, helpless Mukku screams in anguish.

Yes, just like Jack, Mansoor is devoured by the floods, but he dies with the satisfaction that he saved his beloved.

(The above story first appeared on LatestLY on Dec 07, 2018 12:00 PM IST. For more news and updates on politics, world, sports, entertainment and lifestyle, log on to our website latestly.com).