Laxmii: Akshay Kumar Shares The New Poster Of The Film With Changed Name After Backlash

Akshay Kumar's Laxmmi Bomb is now Laxmii and the actor shared the alter name with a new poster. But it seems to match the revised name, the poster narrative also underwent some change. 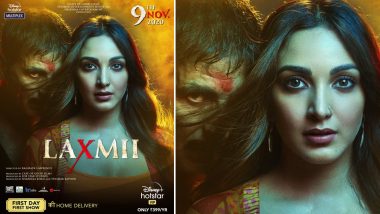 After raging controversy on its name, Akshay Kumar and the makers of Laxmmi Bomb changed the title to Laxmii. They decided to give in to the petty demands even when the movie is releasing on Disney+Hotstar and there is no fear of theatres getting demolished because of the conflict. Arm-twisting Bollywood has become a recreational activity in this Corona inflicted country. Today, Akshay shared the new and altered poster of the film and it seems the narrative also has undergone a change here. Mukesh Khanna is Happy With Akshay Kumar’s Laxmii Title Change, Says People Will Not Take ‘Pangas With Hindu Devi Devtas’

All this while the posters had Akshay Kumar in the forefront because the movie actually revolves around him playing a cross-dresser after getting possessed by the ghost of a transgender. But the new poster has Kiara Advani in the front while Akshay lurks in the back in his getup from the film. Guess it was done to justify the name but it looks dull.

Lakshmi bomb is one of the many firecrackers we burst during Diwali. Nobody has any issue calling it so or using it as an eve-teasing slang. But when it adorns a movie, it becomes a reason for great concern as it apparently hurts sentiments. Religion is obviously bigger than all these petty beliefs but when you have a movie to release and you don't want to deal with conflict, you bow down to these diktats. That's what happened to Laxmii!

(The above story first appeared on LatestLY on Oct 31, 2020 01:13 PM IST. For more news and updates on politics, world, sports, entertainment and lifestyle, log on to our website latestly.com).