Madhubala is one of the actresses of yesteryear who has transcended through generations and is still showered with the same love and affection. On her birth anniversary today, we dared to put together a few pictures of her beauty, grace and elegance. 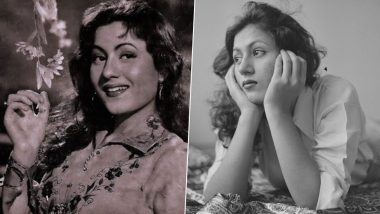 Madhubala was born on February 14, 1933. This makes Valentine's Day even more epic as she was the actress who not only captured the hearts of Indian men but the west as well. She was a beauty with a mischievous laugh but her eyes were much more expressive. It could transform from a twinkle to sorrow within seconds and you can't do anything but marvel at her skills. She had a short life and a tumultuous love life. Yet she never stopped being one of the most desirable women who is in love in movies. Madhubala Birth Anniversary: 5 Songs of the Iconic Star Which Will Be Cherished for Generations

Such was her beauty that Madhubala gained international acclaim. In 1951, James Burke did a photoshoot with the actress for LIFE magazine which accentuated her elegance. There was also a full-page feature of the actress on Theatre Arts Magazine in 1952 where she was called, "The Biggest Star in the World – and she’s not in Beverly Hills". In fact, it is said that Frank Capra Jr wanted to cast her in a Hollywood film but her father wouldn't let that happen.

Today on her birthday we bring to you 10 pictures of the legendary Madhubala who was grace personified.

Madhubala for Life magazine in 1951. Look how gorgeous she looks, timeless beauty ✨ pic.twitter.com/meBXrzX19g

Some pictures of pure beauty!

These pictures were taken in 1951 for "Life Magazine!"

Madhubala's movies, be it Mughal-E-Azam or Chalti Ka Naam Gaadi, have been our go-to place to adore her. On her birth anniversary today, we will do just that.

(The above story first appeared on LatestLY on Feb 14, 2021 08:20 AM IST. For more news and updates on politics, world, sports, entertainment and lifestyle, log on to our website latestly.com).