Madhur requested Karan Johar and Apoorv Mehta to not dent his upcoming project about Bollywood wives. "I humbly request you to change the title," he said. Madhur has also filed a complaint with Indian Motion Pictures Producers' Association (IMPPA) against Karan. 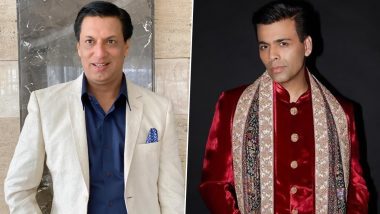 Madhur Bhandarkar has slammed Karan Johar and Apoorva Mehta on Twitter. The Fashion director says that the other two filmmakers had requested him to give away the title, Fabulous Wives, which he had registered. Madhur alleges that when he refused to give away the title, the nakers went ahead with Fabulous Lives of Bollywood Wives, as the title of their Netflix original. He says that it is morally and ethically wrong to tweak the title into. 12 Years of Fashion: Madhur Bhandarkar Reminisces His National Award-Winning Film with Priyanka Chopra and Kangana Ranaut (Read Tweet).

Madhur requested them to not dent his upcoming project about Bollywood wives. "I humbly request you to change the title," he said. Madhur has also filed a complaint with Indian Motion Pictures Producers' Association (IMPPA) against Karan.

"We wish to inform you that we are having the approved title 'Bollywood Wives' for feature film/web series/short film. We have come to know that your member Dharma Productions are using a similar title with a tagline 'The Fabulous Lives of Bollywood Wives' illegally and without any authorisation. The use of the similar title is an infringement of the rights of the original holder," Bhandarkar sent a letter to IMPPA along with the Guild and Netflix. Fabulous Lives of Bollywood Wives Trailer: This Netflix Show Is Giving Us Quite A Keeping Up With the Kardashians Vibe (Watch Video).

Dear @karanjohar U & @apoorvamehta18 had asked me 4 the title #BollywoodWives for web,which I refused,as my project is underway. It is Morally & ethically wrong u to tweak it to #TheFabulousLivesofBollywoodWives. Pls do not dent my project. I humbly request u to change the title.

The Netflix series in question centres follows Seema Khan (wife of Sohail Khan), Maheep Kapoor (wife of Sanjay Kapoor), Bhavana Pandey (wife of Chunky Panday) and Neelam Kothari Soni (wife of Samir Soni) as they navigate their fabulous lives. Much on the lines of, Housewives of Beverly Hills.

Watch The Trailer For Fabulous Lives of Bollywood Wives Here:

This won't be an isolated incident of a dispute over the title in Bollywood. In 2019, Kareena Kapoor's Veere Di Wedding and Jimmy Sheirgill's Veere Ki Wedding were in a legal war over similar titles. The court, however, declared the case in favour of makers of Veere Di Wedding.

(The above story first appeared on LatestLY on Nov 20, 2020 05:45 PM IST. For more news and updates on politics, world, sports, entertainment and lifestyle, log on to our website latestly.com).