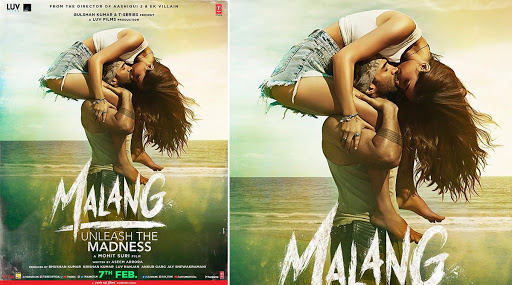 Aditya Roy Kapur and Disha Patani's chemistry is something we are really looking forward to in Malang. We spotted them having a good time chatting away at a studio recently which made us say 'they look good together'. Later the makers suddenly released a still from the film which had the two enjoying the moment. Now we have another glimpse of what it will be between them in the film. Aditya shared a poster of them kissing each other but it is unlike any other liplock you have seen before. Here Disha is sitting on Aditya's shoulder, bending forward to plant a sexy smooch on his lips. It's quite sexy if you ask us but it looked a bit uncomfortable too! But then that's just us! Malang First Look: Aditya Roy Kapur and Disha Patani’s Pairing Looks Cute and Refreshing (View Pic)

Both Disha and Aditya have a good physique, so we are pretty sure they didn't have a problem pulling this off. However, for us, it looks a bit strange.

Malang is supposedly a revenge drama set to release on February 7. Aditya's rage in his character poster explains that bit. The pairing looks hot and since it's a Mohit Suri film, songs are expected to be off the charts. We can only wait and watch.